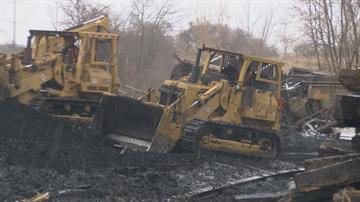 CALEDONIA -- Five-Mile Road remained closed to through traffic, but a day and a half after a train carrying coal derailed significant cleanup progress is being made.

\"It was a mess,\" Wisconsin Railroad Commissioner Jeff Plale said.

A mess getting cleaned up as quickly as possible.  Nineteen cars on a Union Pacific train derailed early Sunday morning, spilling coal down an embankment.  By 6:30 Monday morning, the railway was open again.

\"There was a train waiting just up the way and as soon as it got the OK, it went,\" Plale said.

Union Pacific crews replaced about 500 feet of damaged track.  Removing the coal and damaged cars could take up to a week though.

\"The railroads take this stuff very, very seriously,\" Plale said.  \"They're out inspecting all the time because they can't afford to have a track go down because they lose money.\"

Union Pacific tells CBS-58 fewer than 12 trains cross the stretch each day.  That means they send a visual  inspector out twice a week.  But those inspections increase when extreme heat or cold hits, just like Wisconsin had two weeks ago.

\"We have various types of machines that will either look inside the rail to see if there's any defects  there or we have other machines that look at how the track is setting or situated,\" Union Pacific Spokesman Mark Davis said.

A visual inspector had just checked the tracks Friday, seeing nothing out of the ordinary.  Still, Union Pacific sent pieces of the track back to its labs to test if weather or a faulty line was to blame.

\"Once we determine that cause, we're able to look for ways to, if not minimize derailment occurring again,  but one that could possibly lead to eliminating them all together,\" Davis said.

\"We have an awful lot of trains that run through this state and we want to make sure that they run as safely as possible,\" Plale said.

Union Pacific looks at three main factors they look at when replacing rails.  Those are the weight on the tracks, the number of trains that pass over the stretch and the weather.  It could take several weeks to get final results, but the railroad thinks two of those: weight and temperature, were the chief culprits.