Zelensky to US lawmakers: 'We need you right now' as he invokes Pearl Harbor and 9/11 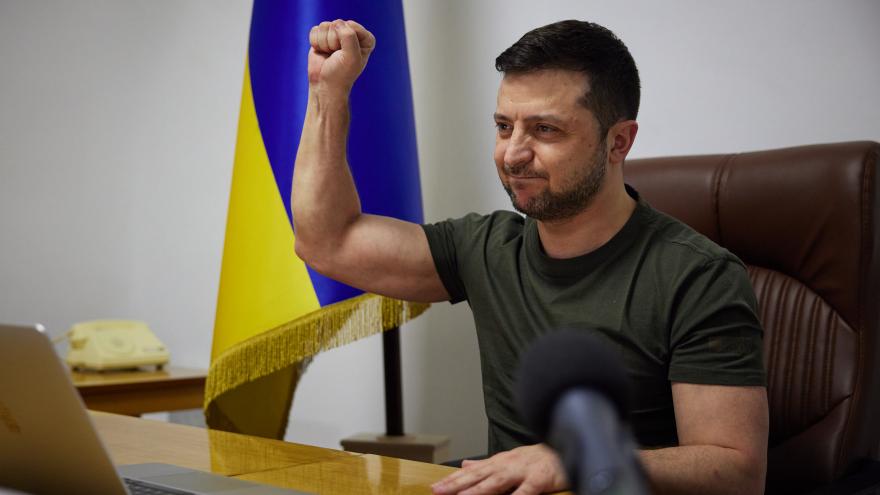 (CNN) -- Ukrainian President Volodymyr Zelensky appealed to Congress for help directly Wednesday, telling US lawmakers "we need you right now" as he invoked tragedies in American history like the attack on Pearl Harbor and the September 11 terrorist attack.

The historic speech given as a virtual address on comes as the United States is under pressure from Ukraine to supply more military assistance to the embattled country as it fights back against Russia's deadly attack.

"Friends, Americans, in your great history, you have pages that would allow you to understand Ukrainians, understand us now, when we need you right now," he said through a translator at the start of his speech, though at the end of his remarks he spoke in English.

"Remember Pearl Harbor, terrible morning of December 7, 1941, when your sky was black from the planes attacking you," Zelensky said. "Just remember it, remember, September the 11th, a terrible day in 2001 when evil tried to turn US cities into battlefields, when innocent people were attacked from air, just like nobody else expected it and you could not stop it. Our country experiences the same, every day, right now at this moment."

While there is widespread bipartisan support for aid to Ukraine, many US lawmakers also believe the US should be careful not to be drawn into any kind of direct, armed conflict with Russia.

Zelensky also cited his call for the US to help enforce a no-fly zone in Ukraine -- to protect civilians -- and provide fighter aircraft that the Ukrainians can use to defend themselves.

These two controversial options divide lawmakers, with Republicans more hawkish about giving Ukraine jets, but some Democrats -- and the White House -- concerned Russia could consider such a move an escalation and potentially draw America into war.

Lawmakers of both parties say they are wary of a no-fly zone at this time because they think it could pit the US directly against Russia in the skies over Ukraine.

President Joe Biden plans to detail US assistance to Ukraine in a speech of his own later in the day Wednesday.

The US and its allies have taken a wide range of actions in recent weeks intended to punish Moscow for its invasion, including the rollout of harsh sanctions and export controls and a $350 million security assistance package. In addition, Congress recently passed a $13.6 billion emergency package to supply defensive, humanitarian and economic aid to Ukraine, and the Biden administration announced a $200 million assistance package this past weekend.

House Speaker Nancy Pelosi and Senate Majority Leader Chuck Schumer announced the virtual address in a letter to lawmakers earlier this week. The speech was broadcast live and livestreamed.

"I hope he will acknowledge what we have done, but then call upon us to do that which he thinks is necessary to ultimately have the Ukrainians prevail," Senate Foreign Relations Chairman Bob Menendez, a New Jersey Democrat, told reporters ahead of the speech when asked what he expects from the virtual address.

"He's the President of his country, he's going to make the maximalist ask on behalf of his people, that's to be understood, but that always has to be reconciled with what's in the national interest and security of the United States," Menendez said when asked about requests from Zelensky such as a no-fly zone.

"I do think it's important for Ukraine to prevail in the national interest of the United States, I just don't think a no-fly zone or direct confrontation is what's necessary to do that," Menendez said.

There is a push by some lawmakers in Congress to add provisions for providing Ukraine with fighter jets to legislation targeting Russia's energy imports and trade status, but it is not yet clear what the fate of that effort will be.

Senate Republican Whip John Thune of South Dakota said Monday that there is broad bipartisan support for legislation that targets Russia's energy imports and trade status to punish the country for invading Ukraine. But, he said, members might want to add other provisions, such as approving the deployment of fighter jets to Ukraine from NATO countries, like Poland, a dynamic that could complicate quick passage of the legislation.

The Biden administration recently rejected a proposal from Poland to transfer fighter jets to Ukraine through the United States, arguing it risked an escalation as the US and NATO seek to avoid an outright conflict between the alliance and Russia.

"I know the administration has its position on that, but there would be a lot of bipartisan support for jets," Thune told reporters in the Capitol.

"We're going to hear from Zelensky again tomorrow and I'm sure he'll make an ask to ratchet up the level of assistance we're providing, to include the MiGs," Thune said on Tuesday, a reference to MiG fighter jets. "It should be an all-hands-on-the-deck effort to give them everything they need to fight their own battles. There are things I think they haven't received yet that they could that would help, lethal aid that would help them at least try and further fight and block the Russians from gaining access to a lot of their major cities," he said.

"The speech tomorrow should continue to elevate the issue in a way that I think will bring additional pressure on not only the administration, but both political parties in Congress to do everything possible to help the Ukrainians," Thune added.

But White House press secretary Jen Psaki told reporters on Tuesday that, despite requests from Zelensky, the White House does not support instituting a no-fly zone over Ukraine or supplying the Ukrainian Air Force with new fighter aircraft.

"I would note that [the Pentagon] said that adding aircrafts to the Ukrainian inventory is not likely to significantly change the effectiveness of the Ukrainian Air Force, relative to Russian capabilities," Psaki said during Tuesday's news briefing. "And the assessment was that the transfer of these planes may be mistaken as escalatory, as we said, and could result in a significant Russian reaction, but that is the risk assessment that was done. That risk assessment hasn't changed."