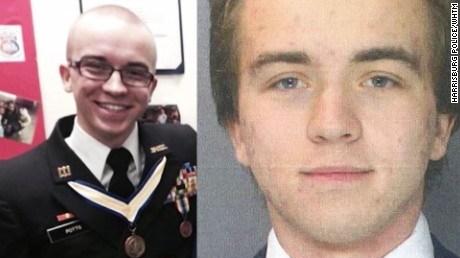 (CNN) To his Pennsylvania classmates and others, Asher Potts seemed to be the perfect high school student, a National Honor Society member who was active in his community and a lieutenant in the Navy Junior Reserve Officers Training Corps.

But to authorities he is an impostor: not a teenager at all, but a 23-year-old Ukrainian national.

On Tuesday, the Harrisburg Police Department arrested Artur Samarin, 23, on charges of identity theft, tampering with public records and theft by unlawful taking. Additional charges were announced Friday in connection to an alleged sexual relationship involving Samarin and a then-15-year-old student in 2014. He was 22 years old at the time of that relationship, police said in a statement Friday.

Already in custody, Samarin was charged Friday with statutory sexual assault and corruption of minors, the police statement said.

Samarin's attorney did not have a comment about the case when reached by CNN on Saturday.

According to police, Samarin arrived in the United States on a three-month exchange visitor visa while working for a local company. When that expired, he applied for and was granted a tourist visa. That visa expired on March 1, 2013.

In 2012, he began attending John Harris High School under the fake name, according to police. To enroll, police say he used a falsified Social Security card, which was approved "after multiple attempts at several Social Security Administration offices," according to the statement released Friday. Police received a complaint in December 2015 that alleged that the student then known as Asher Potts was "in the United States illegally, and was having sexual relationships with female students," according to a statement released Friday by police. It was not clear from the statement who initiated the complaint.

The tip about alleged sexual relationships led to uncovering the false identity, according to Dauphin County District Attorney Ed Marsico.

It's unclear exactly when Samarin arrived in the United States, but authorities said he stayed beyond the expiration of his visa, eventually assuming the false identity.

Before his arrest, Samarin had been living with a married couple who had taken him in, according to Marsico. It is unclear how he met the couple and how long he lived with them.

"It was shocking," Brian Vasquez said of Samarin's arrest. Vasquez knew the Ukrainian national from their time together in Navy ROTC. "He was in the honors society, the food bank program. We were in ROTC together. My interactions with him were based on bettering the school."

In May 2014, Pennsylvania State Rep. Patty Kim posted a picture with Samarin on Twitter with the message: "Asher Potts, #HBG HS [sophomore] with a 4.16 GPA in ROTC is a new member of the Nat'l Honor Society. #going places #proud."

Later the same year, Samarin appeared in a picture posted to Pennsylvania State Rep. Mauree Gingrich's Facebook page, praising "Asher Potts" for "a commendable job in his fundraising." The post appeared to have been taken down Thursday afternoon.

Kim told CNN she has known "Asher" for two years.

"I keep thinking back if I had missed any signs as I'm still in shock," she said in an emailed statement. "I observed that he lived his life to the fullest by accomplishing so much in a short period of time. It seems to me now that he wanted to maximize his time before he would get caught. ... He must have had a rough life in his homeland to not want to go back. I just wish he'd found a way to stay here legally."

Gingrich did not respond to CNN's request for comment.

Vasquez said his friend spoke with a "Russian accent" and "always tried to cheer people up."

Samarin could be bossy at times, Vasquez said, but he held the rank of lieutenant in his military training and "his job was to make sure we follow the rules."

Vasquez said Samarin didn't share a lot of personal history but spoke in general terms about "some rough patches in his life" and not knowing "who he was."

U.S. Immigration and Customs Enforcement at the Department of Homeland Security is "closely monitoring" the Samarin case, according to a federal official.

The Navy Recruiting District in Pittsburgh and the major who ran the high school's ROTC program did not return calls seeking comment on Thursday.

Harrisburg School District spokeswoman Kirsten Keys said in a statement that the district was cooperating with the investigation, CNN affiliate WPMT reported.

In a statement, Harrisburg School District spokeswoman Kirsten Keys said that the district has been and will continue to fully cooperate with the police investigation.

"While we do not know all of the details surrounding the arrest, we are treating this as a serious matter," said Keys.

"I was told that he was arrested ... at his home," Knight-Burney told the station.

"My parents and I were at Walmart, and when we were in the check-out line, the lady in front of us couldn't pay for her food and had to put it back," Potts told the newspaper. "That's when a lightbulb went on and I knew I needed to help the less fortunate."

Potts told the newspaper that he asked for canned food for his birthday and raised 1,000 pounds of food for the Central Pennsylvania Food Bank.

Samarin appeared in Harrisburg Magisterial Court on Tuesday night, according to court documents.

His plea was not available from the court on Thursday.

Samarin is in Dauphin County Prison, according to the prison's website.

He has a preliminary hearing on March 4, according to court documents.