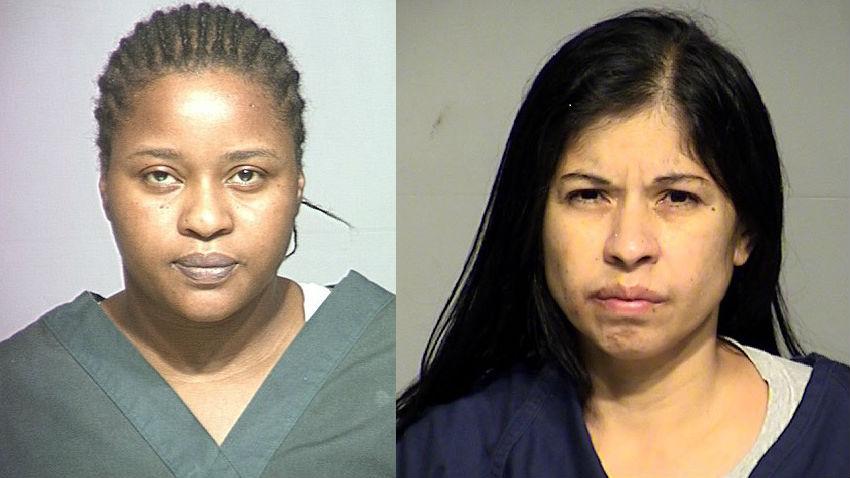 Mary Martinez and Etter Hughes have been charged for killing a 7-year-old after prolonged abuse and abusing his 9-year-old brother. The 9-year-old is still in the hospital for abuse and severe malnutrition.

"To hear about a child going like that, it's heartbreaking," said Demetrius Jones.

Jones places a candle at a growing memorial for 7-year-old Trevion Winningham.

"I didn't know him, but no child should have to suffer through this," said Jones.

He is a father of 3, and wants to pay his respects. Jones says he wish he could have done something.

"We're having Thanksgiving dinner, and there's a child over here dying," said Jones.

Demetrius's sister, Latoya encourages children to speak up, and says the neighborhood would have helped.

Trevion and his brother would play with Latoya's 11-year-old son. Who couldn't handle the news.

"He cried. My son is very sensitive so he's like, 'Mommy I like the little boy. I don't know why they did him like this,'" said Latoya Jones.

Latoya Jones says the boys were happy, but she barely saw Etter Hughes or Mary Martinez,

Etter Hughes entered the courtroom in handcuffs, an anti-suicide smock, and tears down her face.

A criminal complaint details the treatment Trevion received was consistent with cruelty and torture.

Trevion and his brother were living with 2nd cousin Etter Hughes and her son. They had recently come from Arkansas to Milwaukee so Etter Hughes could get a better job. The boys' mother, Candice, asked Hughes to take her sons and she would come to Milwaukee soon after. Hughes says Candice never came to Milwaukee. Hughes moved in with Mary Martinez, a women Hughes met in prison when she was serving a sentence for "child neglect causing death" in 2003.

Trevion's brother and Etter Hughes' 13-year-old son told police Martinez would strike the brothers with extension cords, belts, a blue stick, shoes and her fist. They said Martinez would punch the boys with a closed fist, and had kicked Trevion so hard in the back he fell over. On one occasion she beat Trevion until he was crying and "losing his breath."

They also told police the brothers were not allowed to eat any of the food inside of Defendant Martinez’s refrigerator. When Martinez would let other children eat, she told the brothers, “you can’t have crap.” Etter Hughes' 13-year-old son would make food for the brothers when others were done eating.

Mary Martinez's son Carlos Gonzalez told police Etter Hughes tied up the two brothers in the living room, and Hughes gave Martinez permission to "physically discipline" the boys. Gonzalez also said he could hear his mother abusing the brothers while he was in his bedroom.

The complaint detailed Etter Hughes dropped Trevion off at the hospital around 11:20 a.m. He had been unresponsive since Hughes woke up at 9:30 a.m. Hughes wanted to call 911, and told police Martinez didn't want the police at her house. She says Martinez told her to "take [Trevion] to the woods and drop him off."

When Trevion was brought to the hospital doctors worked on him for hours. He would often lose and then regain a heartbeat. They also admitted his brother for abuse and severe malnutrition. The criminal complaint details he "had loose fitting clothing, no underwear, and stool in his pants. [He] had no subcutaneous fat with wasting and prominence of the cheek bones, facial bones, ribs, hip bones, elbows, and scapulae."

Hughes says she never abused the children, but believed Martinez was abusing them. She also noticed they were losing weight and knew it could lead to their death due to her history of a 1-year-old child died in Hughes care in 2003.

Etter Hughes and Mary Martinez were given $150,000 cash bail. They will both be back in court on December 12th.

On Saturday CBS 58 received gruesome new details in the death of a 7-year-old Milwaukee boy.

Trevion Winningham died Tuesday at Children’s Hospital after being treated for multiple injuries including malnutrition and trauma to the head and chest.

Now two women are charged with his death.

This criminal complaint was released Saturday morning outlining graphic details of the abuse Trevion Winningham faced before his death.

If convicted, Mary Martinez and Etter Hughes are looking at more than 50 years in prison.

Police say the two women are responsible for a long list of injuries to Trevion who was 11 pounds underweight with bruises all over his body when he was admitted to St Luke’s Hospital on Tuesday.

According to a criminal complaint, Trevion was dropped at the hospital by his cousin Etter Hughes who was supposed to be taking care of him.

Trevion was transferred to Children’s Hospital where doctors worked on him for hours treating him for injuries including abrasions to his neck, open wounds on his shoulders, bruises on his chest and stomach, and rectal bleeding.

It was too much for his frail body and Trevion died after almost six hours of treatment. But how did this happen?

According to police, Trevion’s mother lives in Arkansas and sent her two children to live in Milwaukee with Hughes, who had already done time for a child homicide back in 2003. Hughes moved in with a woman named Mary Martinez who she had met in prison.

The police report suggests Martinez is responsible for most of the abuse, but Hughes didn’t do anything to stop it. The two now face a combined totals of six felony counts of child neglect, physical abuse of a child, and failure to act to prevent bodily harm to a child.

Trevion’s brother is also being treated in the hospital for abuse.

Two other men were taken into custody in relation to this case but have yet to be charged.

Two Milwaukee women are facing charges in the death of 7-year-old Trevion Winningham.    A criminal complaint has been field against Etter Hughes and Mary Martinez.  Each of the women area charged with child neglect resulting in death and child neglect with great bodily harm.     The 44-year-old Hughes is also charged with two counts of failure to act to prevent bodily harm to a child and the 47-year-old Martinez is two counts of physical abuse of a child causing bodily harm.

Trevion Winningham died at St. Luke’s Hospital on November 29, less than six hours after he was admitted unresponsive and suffering with multiple, severe injuries and malnutrition.  A second child, a 9-year-old boy identified as J.W. was also admitted and treated for similar injuries described as life-threatening malnutrition and severe child physical abuse.

According to the criminal complaint, Hughes is the second cousin of the Trevion’s mother and moved to Milwaukee from Arkansas with the two boys in August of this year.  The children’s mother remained in Arkansas.

Hughes moved into a home with Mary Martinez.   The two had met while Hughes was in custody for a child homicide in 2003.  The criminal complaint alleges that Martinez committed the abuse that at one point is described as torture and that Hughes took no steps to stop the abuse.

Both of the women are expected to make their initial appearances in Milwaukee Circuit Court today.