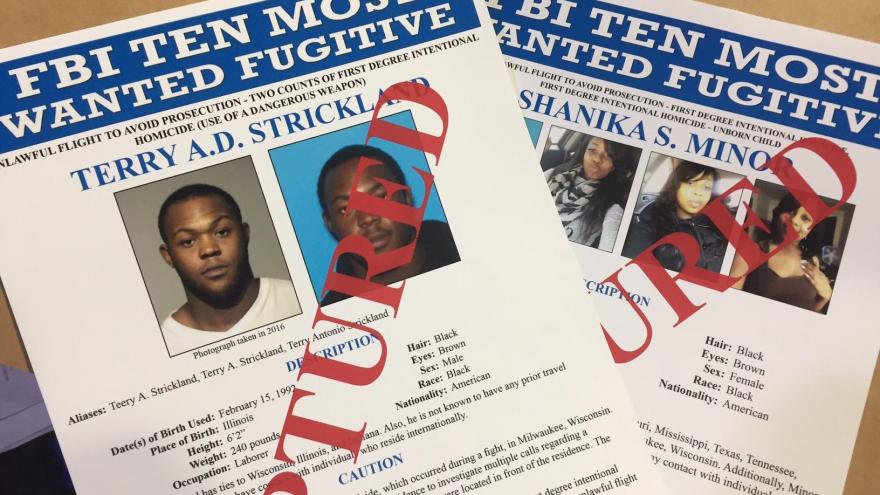 It’s pinned to the wall of thousands of stores and businesses across the country, 10 names and faces identifying the worst of the worst; fugitives on the run after committing heinous crimes.

That all changed in 2016, when two Milwaukee fugitives were added to the list. Shanika Minor was wanted for shooting and killing a woman, and her unborn child. Terry Strickland was wanted for murdering two men in broad daylight.

Within days, both were captured, thanks to the national spotlight that the list provides.

“If not for the Ten Most Wanted, they might still be out there,” says Special Agent in Charge Justin Tolomeo.

Minor and Strickland were the first Wisconsin fugitives to make the national Ten Most Wanted List since the 1980’s.

In its 67 year history, only 8 Wisconsin fugitives have made the list.

“Clearly there has been a spike in violence in the city of Milwaukee,” says Tolomeo.

So who makes the list? Local agencies, like the Milwaukee FBI, nominate fugitives that meet certain criteria. That includes level of past violence, threat to the public, and potential to flee the area. FBI headquarters then chooses who to add to the list when a spot opens up.

“By listing them on the Ten Most Wanted, it raised their profile,” Tolomeo says of Minor and Strickland. “That was a key reason why they were brought to justice quickly.”

Since 1950, there have been 312 fugitives added to the Ten Most Wanted List. 280 of those have been captured, leading to a success rate of over 90%.

But not everyone that makes the list gets captured.

Leo Frederick Burt has escaped authorities since 1970, after he was added to the Top Ten List for allegedly bombing Sterling Hall on the UW-Madison campus. Burt was last seen in Canada, and was removed from the Top Ten List in 1976.

“We will continue to look for Mr. Burt until we find him,” says Tolomeo. “We never forget, especially a terrorism matter.”

In addition to the Top Ten captures, the Milwaukee FBI also had success in 2016 helping MPD find fugitives that fled Milwaukee.

The FBI continues searching for Dwayne Chaney, wanted for a November, 2015 shooting death on 12th Street. The FBI believes Chaney killed his ex-girlfriend’s boyfriend, in a premeditated murder.