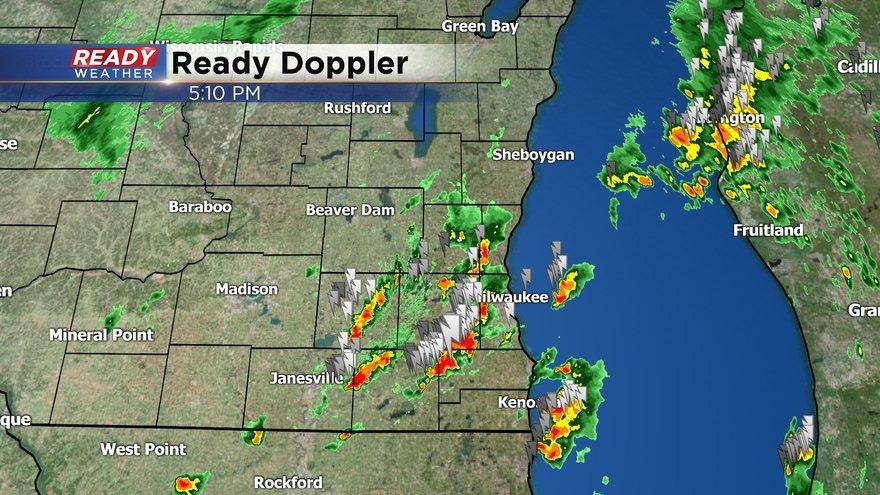 6:45pm Update: Weather conditions are winding down across the area. There are a few isolated storms around, but activity should end by around 10pm. The National Weather Service will go out and survey damage Thursday morning in Washington county to verify the tornado reports. Some pictures and video into the Readywx office look to confirm the rotating storm.

Other minor damage to property has also shown up in the area that was tornado warned on. Additionally, we've had several hail reports with today's storms. Rain has pushed over an inch in spots.

The tornado warning was cancelled at 5:14 p.m. A confirmed tornado was reported just west of Hubertus. Take a look at this Velocity product. You can see that red area where the quick spin up likely occurred. 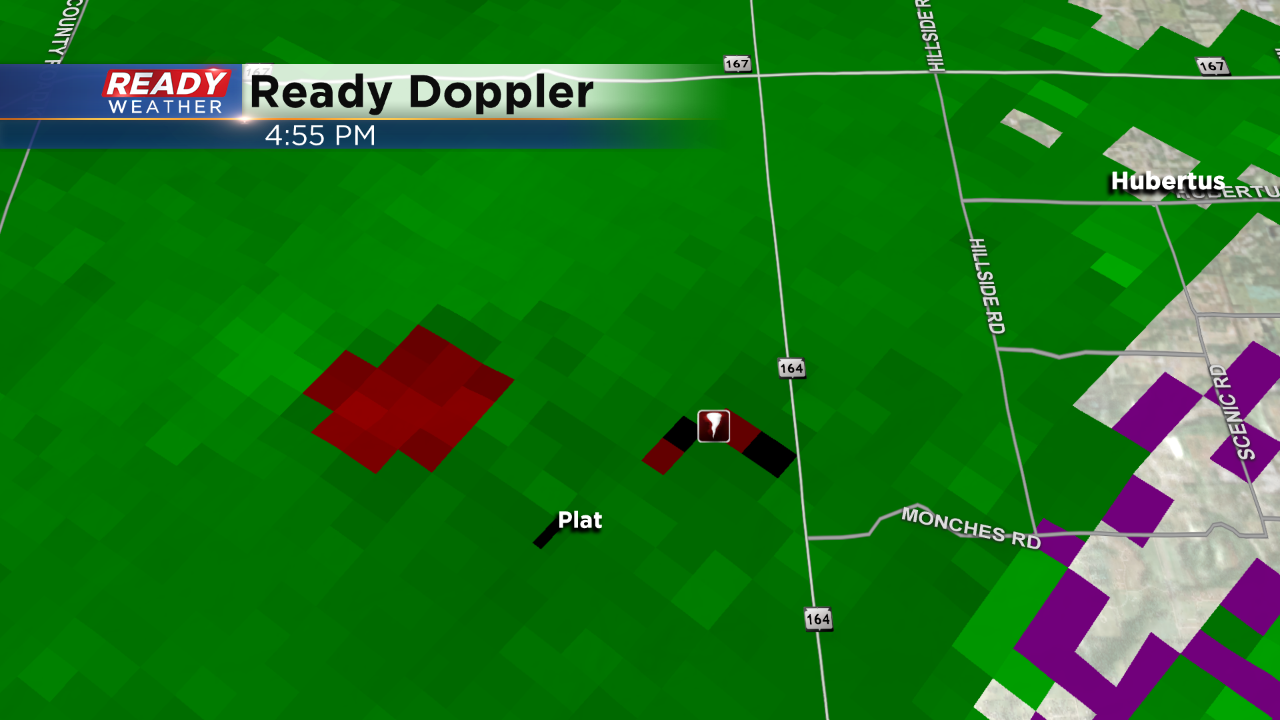 A tornado warning has been issued for Washington County until 5:30 p.m. Radar indicated that a tornado was possible.

Some isolated strong to severe storms have developed near the Madison area this afternoon.  Instability has been spiked across south central Wisconsin, and the storms are feeding off of it.  One cell produced nickel to quarter hail near Madison.

Additional storms are developing to our west and have a chance to pulse up and become strong to severe.  Hail to the size of quarters remains the greatest threat tonight.

Expect additional storms through 7 pm before clearing out. 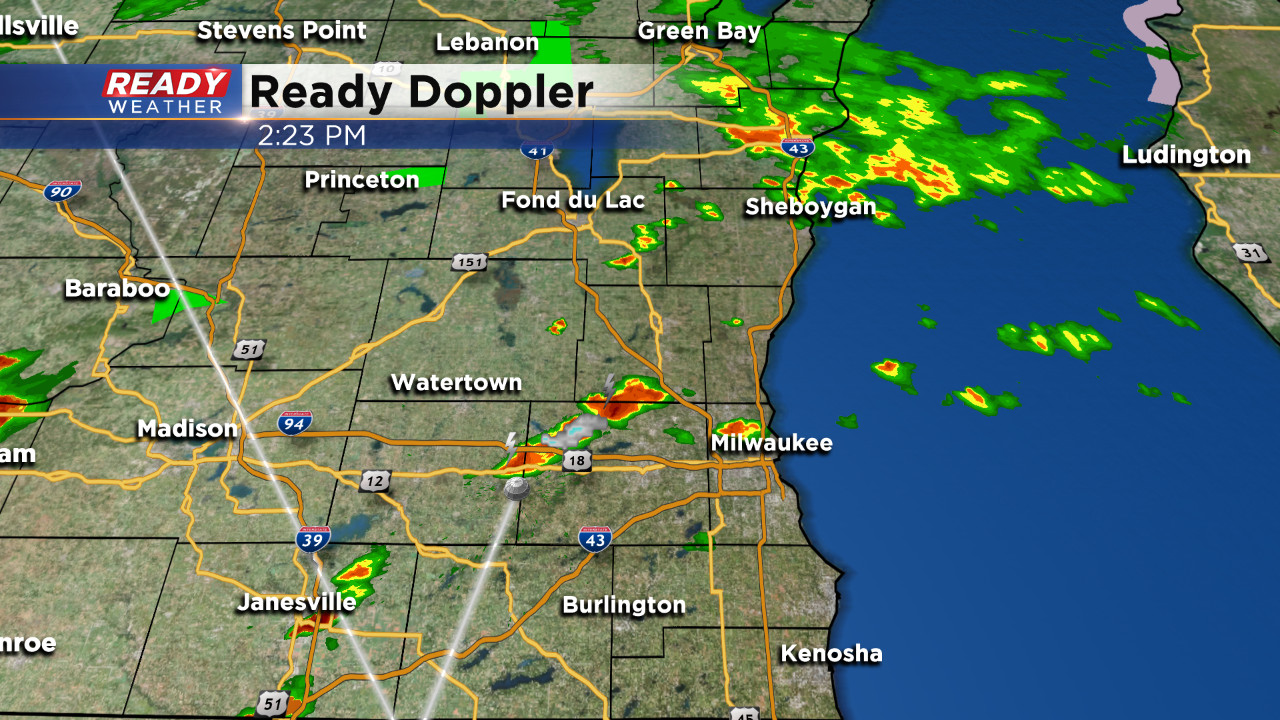 Scattered showers and storms will continue to develop this afternoon and evening.  Storms will most likely stay below severe limits; however, some strong storms could pop producing small hail and gusty winds.

Noon Update: Here's a look at the rain so far: 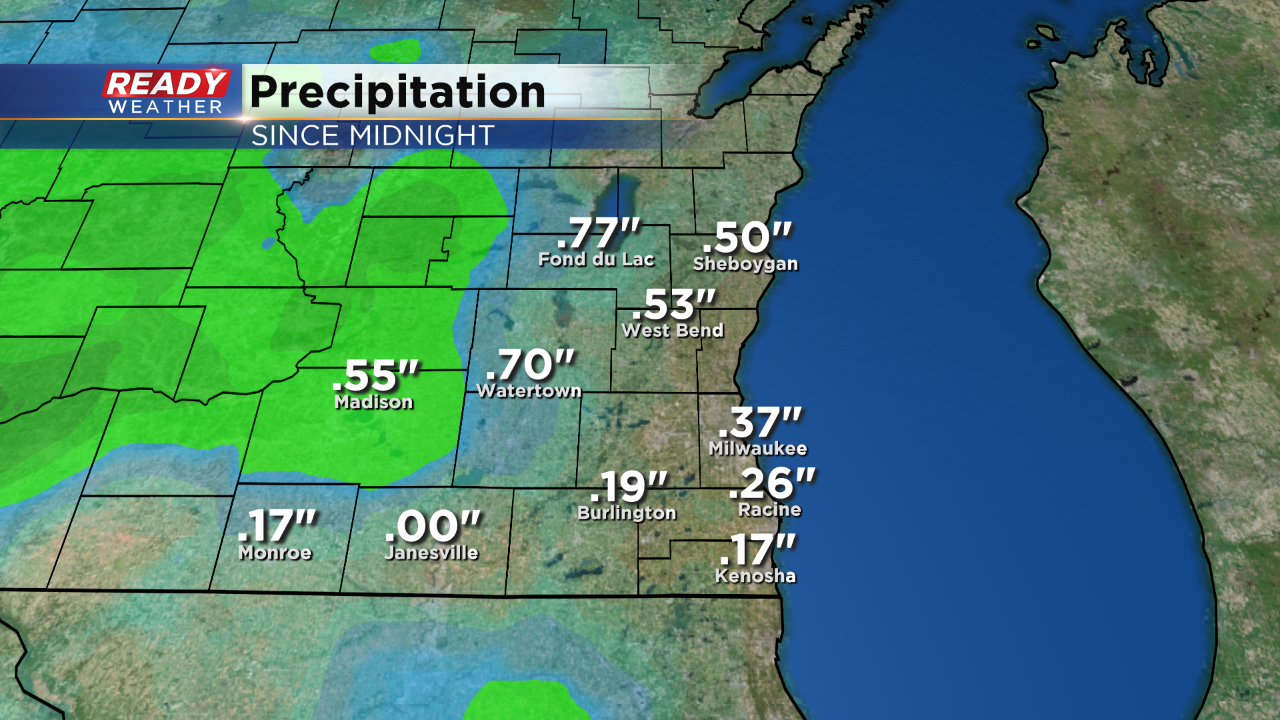 It's also a much cooler day with the clouds and showers around, as depicted here. 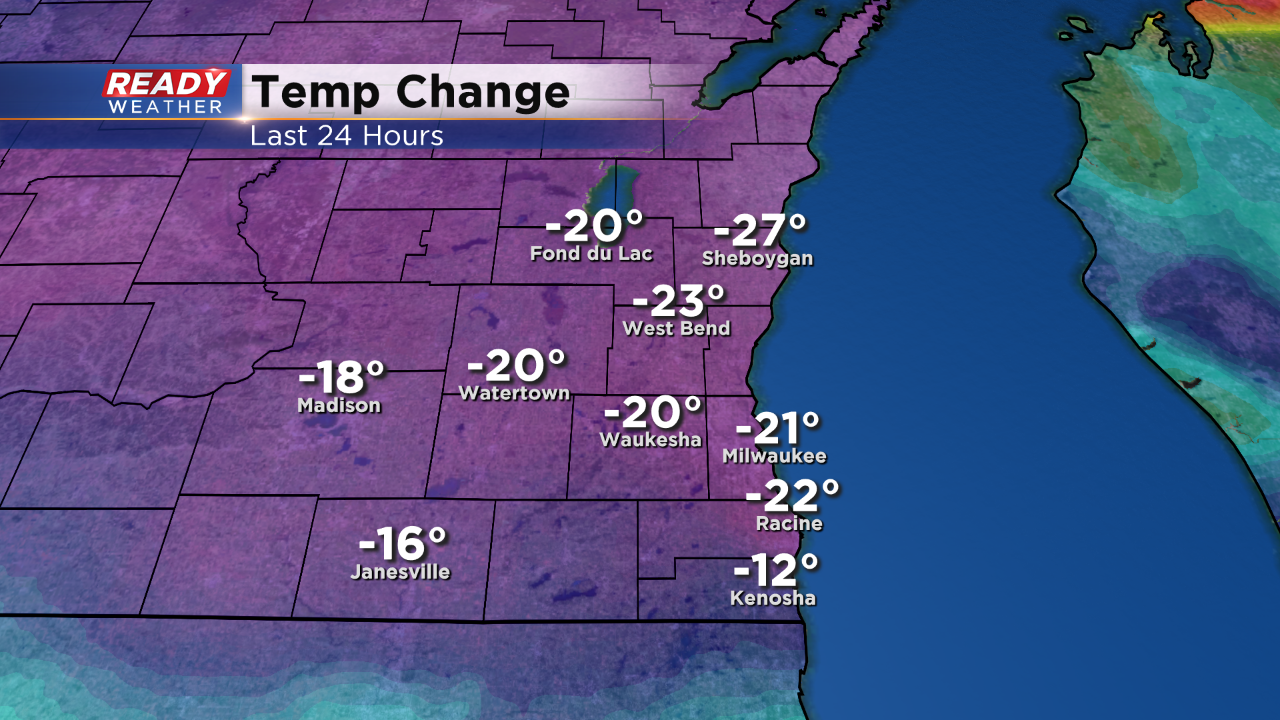 But, some warming this afternoon will cut into temp change numbers. 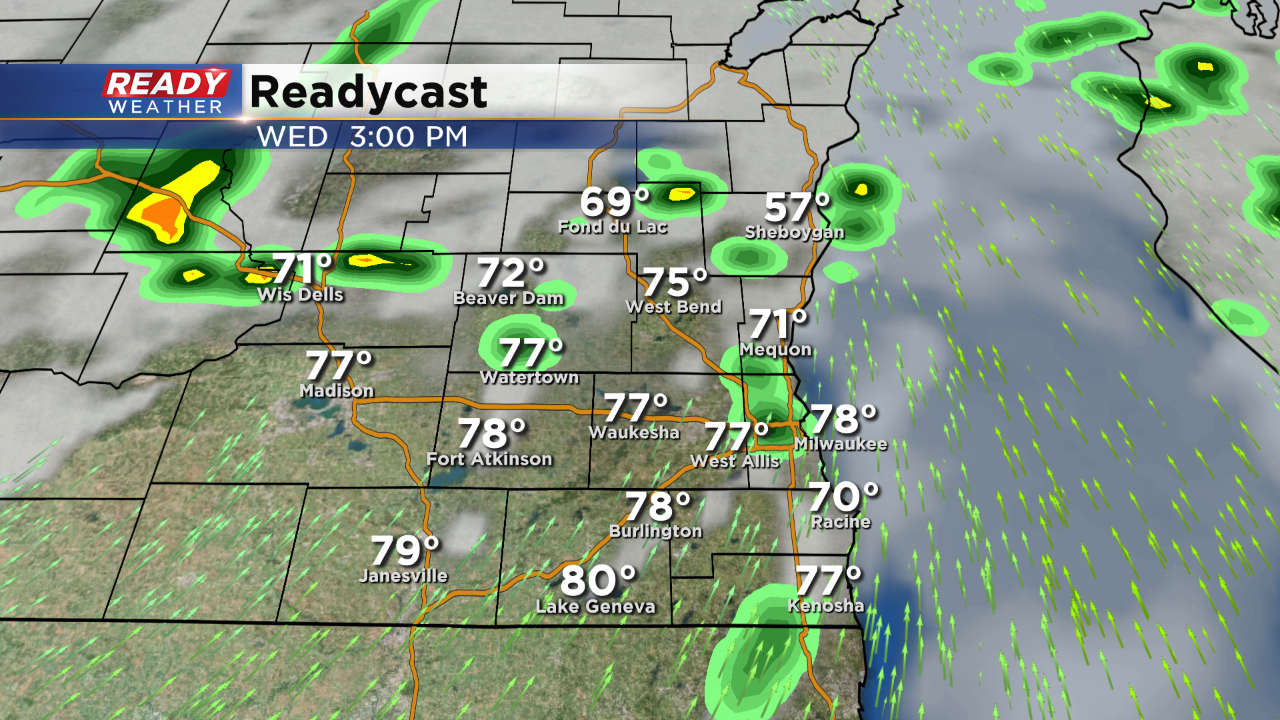 As of now, there's just a few isolated rain showers across the area at this time. Winds are southerly, and slightly southeast, but expected to turn southwest. When that happens we could see a quick spike in temps to the middle 70s. That, plus any clearing could fuel additional storms this afternoon. Take a look at 3pm on our Readycast model. Scattered storms start to flare up again. There's just a small risk for storms to contain larger hail and gusty winds along with downpours. It looks like most of the activity will wind down after sunset.

9 AM Update - storms have weakened some but rain continues to fall in southeastern Wisconsin.  The rain pulls out by late morning, and partial clearing is possible.  We are still anticipating warmer air and some sun to develop.  It appears the threat of storms will continue later today and this evening.  Some could be severe! 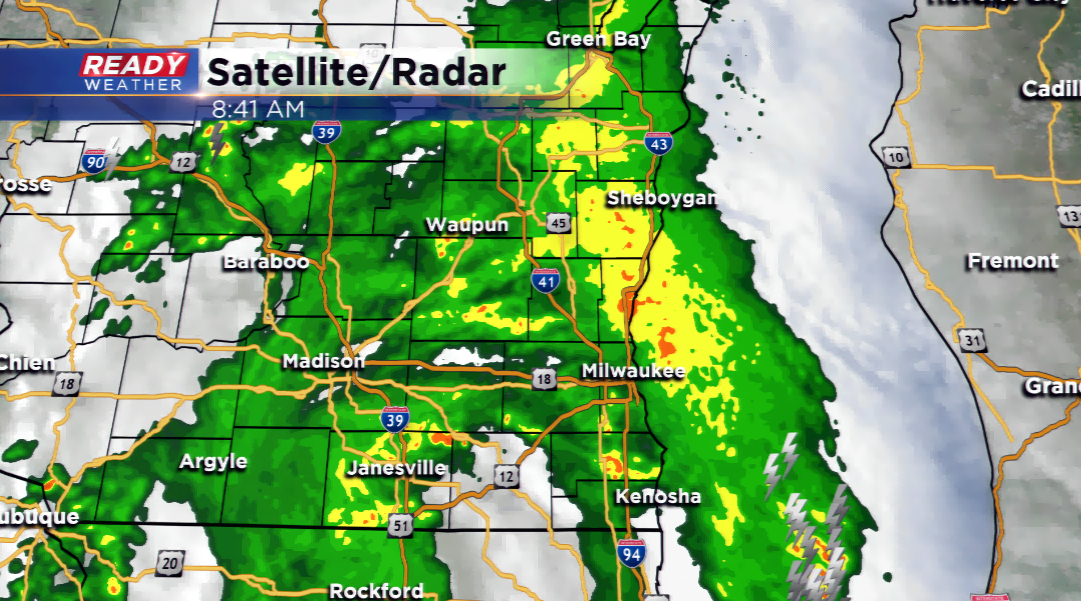 The first of two rounds of showers and t’storms will push into the region this morning. There could be some lightning, heavy downpours and small hail with the initial round. The clouds will keep the overnight temps at bay; this should also aid in getting those temperatures back in the low 70s this afternoon. 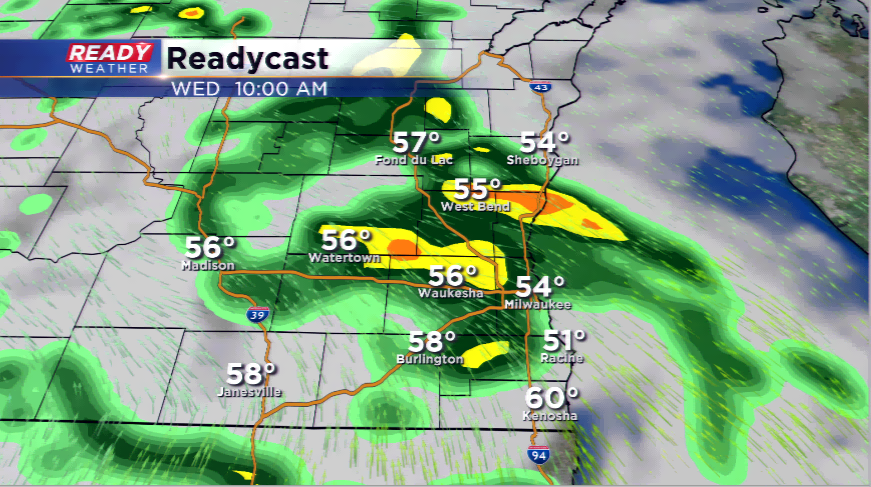 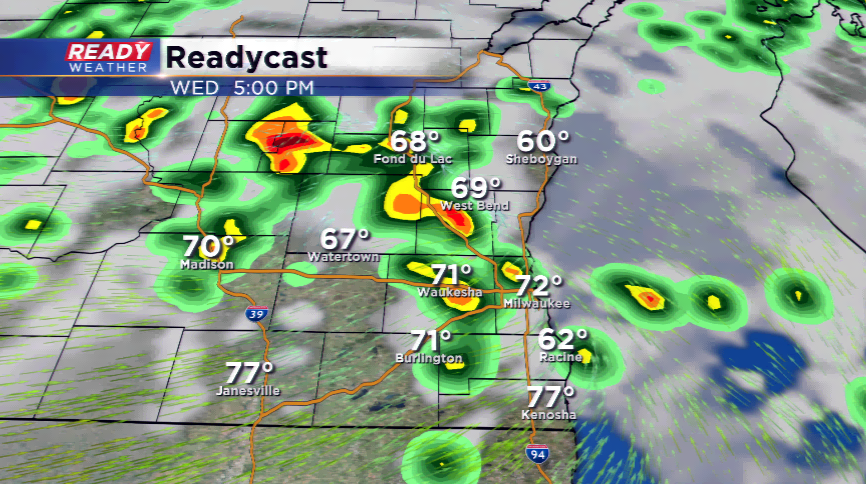 Partial clearing will take place late this morning and early this afternoon which will help kick up more showers and t’storms. If the atmosphere does recover enough, this will drop in a few stronger storms with increased instability. Hail, strong winds, and heavy downpours all possible. The Storm Prediction Center is highlighting most of southeastern Wisconsin for a "marginal" risk of strong to severe thunderstorms. 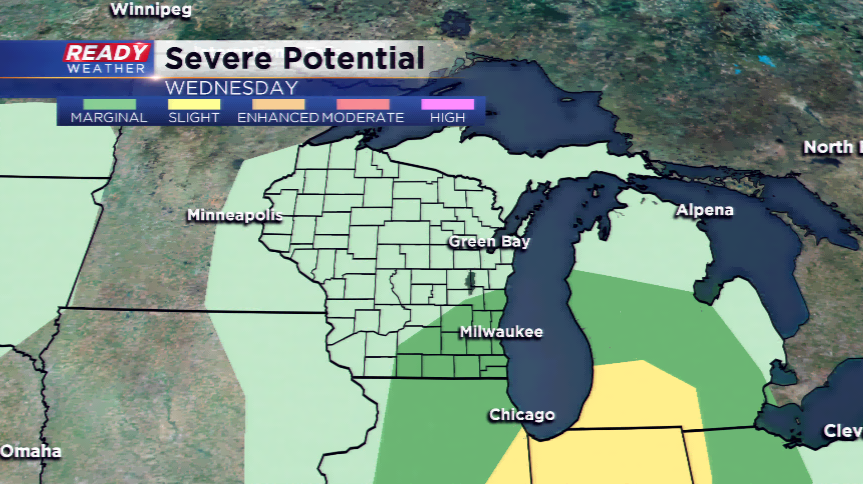 The storms end by late evening and the rest of the night will be quiet. High pressure spirals in for tomorrow. It will be short-lived as more rain is on the way for the end of the week and early this weekend. 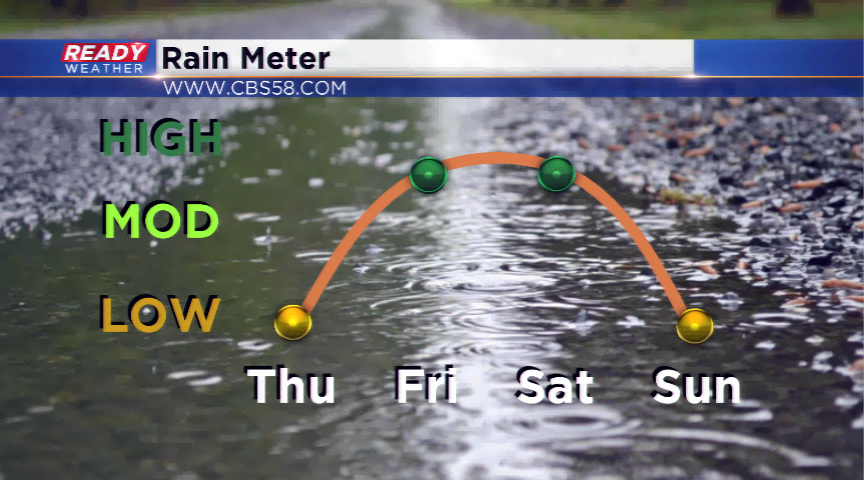 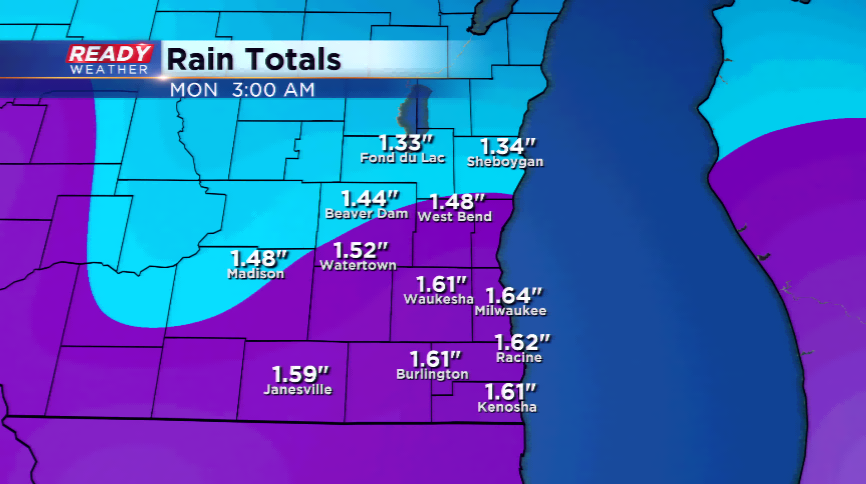