Two Rescued After ATV Falls Through Ice in Dane County 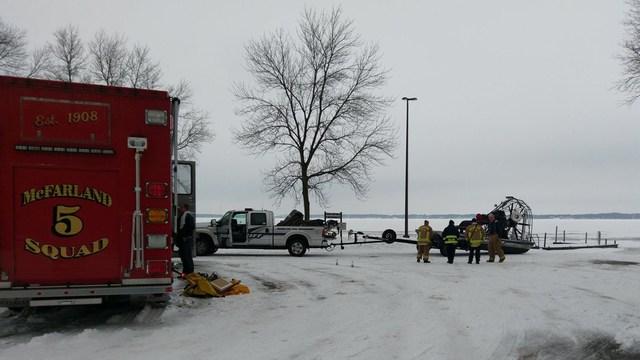 DANE COUNTY - Dane County Sheriff's deputies along with other personnel responded for a report of two individuals who went through the ice approximately .5 miles out from the landing on Lake Kegonsa.

At approximately 7:15 am, a 76-year-old male and a 15-year-old male, both from Stoughton, began traveling on Lake Kegonsa using an ATV to go ice fishing.  While located in the center of the lake, the ice began giving way at which time the ATV broke through and entered the water.  Both individuals also entered the water through the hole created by the ATV and were unable to extract themselves.

Dane County Sheriff’s Office Marine and Trail Enforcement deputies and the Madison Fire Department Lake Rescue Team utilized their airboats, to reach both individuals and successfully pull them from the frigid waters within 30 minutes.  Both individuals were transported to an area hospital for exposure symptoms.

Ice rescues are particularly challenging due to the variations in ice thickness as temperatures fluctuate.  The use of airboats expand the capabilities of first responders by providing improved transport on both water and ice.  The airboat used by the Madison Fire Rescue Team during this incident, which was instrumental in the successful outcome and contributed to the potential saving of two lives, was supplied to the team by the Dane County Sheriff’s Office in 2013, as part of a joint collaboration between the agencies to share resources in order to provide the citizens of Dane County with the best possible response to water rescues.  This incident displays the dedication and commitment of local agencies and personnel to work together in order provide the citizens with the highest level of service possible.

Due to the recent increase in temperatures, the Dane County Sheriff’s Office would like to remind citizens of the possibility of quickly deteriorating ice conditions on area lakes.  If you do decide to go out on one of the area lakes, it is recommended to have appropriate flotation and life-saving devices present