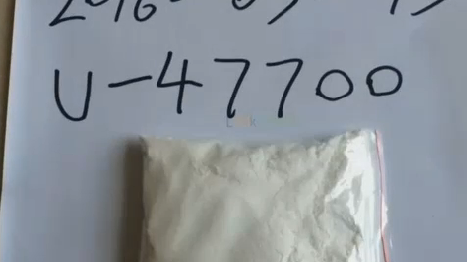 A dangerous synthetic drug has made its way into Racine County and now authorities say they're investigating two deaths connected to the substances that people can buy online.

The drug - U-47700 - is similar in its effects to heroin but is magnitudes more potent. Addiction specialist say that causes a much higher risk of overdose.

Chemicals like this are produced in countries like China - and can be purchased online in a gray area of legality.

But Dr. David Galbis-Reig, medical director of addiction services at All Saints-Wheaton Franciscan Healthcare, says user don't know what they're getting into.

"If you're even an intolerant opiate individual - so anyone who's using heroin - if they use this drug there's a very high risk of overdose death," Galbis-Reig said.

Racine County Medical Examiner Michael Payne says during the past two months two young men - individually on opposite sides of the county - overdosed on u-47700.

Next month a state board will look to reschedule the drug - restricting its legality in Wisconsin.

But Dr. Galbis-Reig says people may will still have access to the drug through the internet and dark web.

"People like young, mostly middle class individuals because these aren't cheap drugs. I mean, you're buying them off of the internet. You have to have some savvy and know how," Galbis-Reig said.

"But I talk to patients about things that are available. I've had patients ask me about 'medications' because some of these are touted as way to get off of heroin. So sometimes they're marketed as solutions to a problem when they in fact are going to create an even bigger problem," Galbis-Reig said.