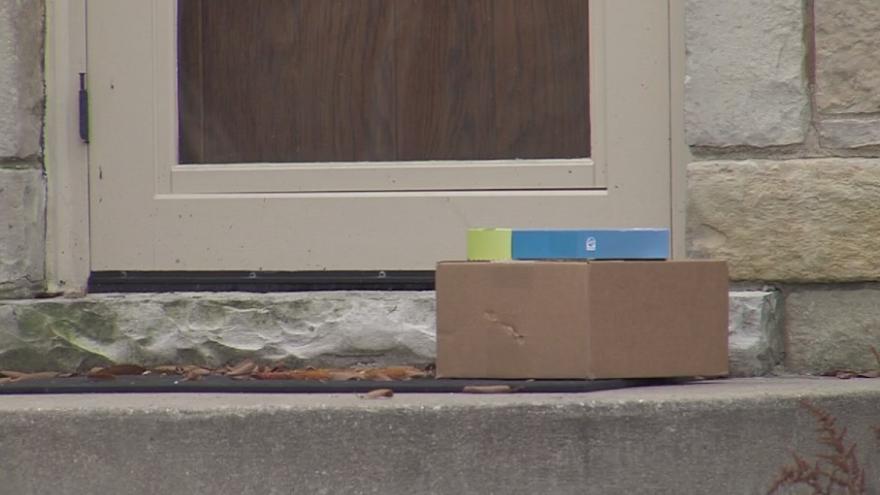 People who got their packages stolen say police were called because a van was following an Amazon delivery truck.

A witness said two people were arrested in an alley. Wauwatosa Police confirm that a 19-year-old and a juvenile were cited for theft.

David Meints who lives in the area says he was doing home repairs when he heard his dogs barking.

”There was a squad pulled off behind our garage back in the alley and then a second squad showed up, third, fourth, fifth," said Meints.

Meints says he saw police arrest a man and a woman near 87th and Center -- the two were driving around in a van.

”Asked the last officer that was hanging around what had happened and he told me they just had caught people stealing packages from all around the neighborhood," said Meints.

The arrest happened just four blocks away from where Joe Crum lives which is near 91st and Center.

Crum had his package stolen just two minutes after an Amazon delivery driver dropped it off.

”They had gotten a call about a suspicious vehicle following around a delivery truck, they followed it to our house, saw the packages, saw that they were empty, decided that they had probably been stolen and got in touch with us," Crum said.

"A shadow, it looks like they probably snuck it off to the side, and knew we had a Ring, and made sure that they kept out of sight," said Crum.

Crum's package had two hats inside. They were returned to him.

Witnesses say that it didn't look like the thieves got away with much.

“Police officer just said that they had Kleenex and coffee filters and all sorts of stuff strewn throughout the van," Meints said.

”Usually we will start having our stuff delivered to our work after Thanksgiving, but it looks like we’ll have to start a little bit earlier now," Crum said.

Police say the two porch pirates have been released but the theft is a wake-up call for neighbors to stay vigilant.

”Whenever in doubt call, and it can never hurt, look out for your neighbors, get a lock box or have your packages delivered to your work," Crum said.

If your package says it’s been delivered but it’s missing— Amazon advises waiting 48 hours. They say in rare cases packages may say they’ve been delivered 48 hours before it gets to your door.