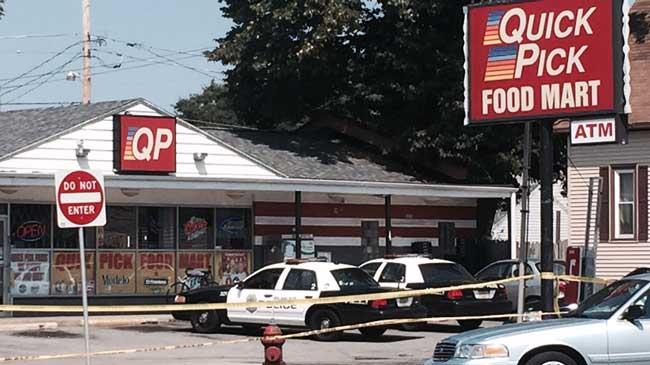 An armed robbery attempt turns into shots fired on Milwaukee's south side. Officers filled the area around the crime scene for about four hours on Friday afternoon.

\"Now it's hitting home,\" said Bulmaro Ornelas, neighbor. \"I live right across the street. I'm saddened by that because we don't need that type of violence anywhere.\"

This time, the violence kept young and adult customers out of the Quick Pick Food Mart. It’s a popular store at the corner of 34th and Lincoln.

\"I feel for the owners and the workers here,” said Alderman Bob Donovan. “You don't know what the hell you're going to be facing anymore in some of these neighborhoods. It's again, sad.\"

Officers rushed the scene shortly after 1:30 p.m. Inside, they found two people with gunshot wounds. Police say one man, a 48-year-old store employee, suffered a non-life threatening injury. The other, a 38-year-old man who was inside the store, was seriously injured.

“We do believe there may have been some witnesses,” said Milwaukee Police Lt. Ray Banks.
Investigators hope surveillance cameras at the store will help solve the case. They're looking for more than one suspect and blocked off a large area near the scene.

“That's pretty routine when you get a shooting like that,” said Lt. Banks. “You're canvassing the area. A lot of people have home security systems.\"

Alderman Donovan encourages neighbors to work with police and, “just be careful,” he said. “Because this world has turned over a million times from when I was growing up here in Milwaukee and this kind of garbage just never occurred period.\"

Now, the community hopes those responsible pay the price.

“Hopefully they get caught,” said Ornelas. “No, they are gonna get caught.\"

The conditions of those injured are unknown. If you have any information about this ongoing investigation, call Milwaukee police.