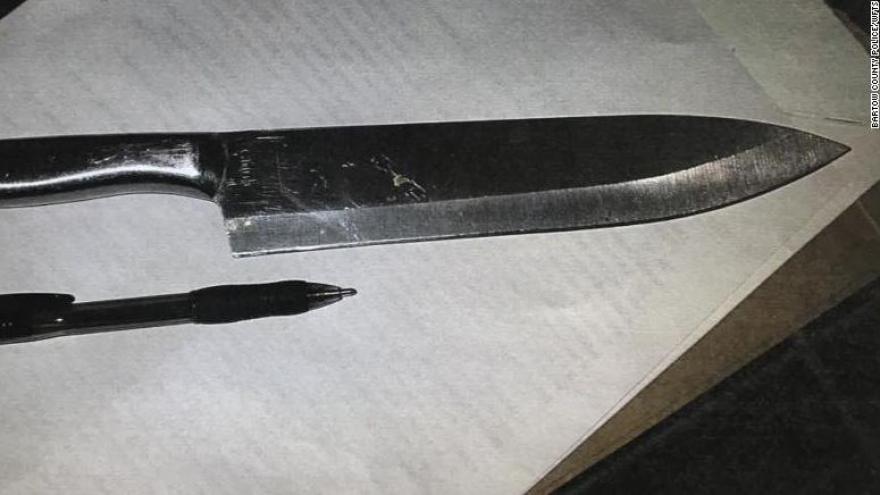 (CNN) -- Two girls at a middle school in central Florida were waiting in a bathroom, planning to overpower at least 15 smaller students, kill them with knives and drink their blood, authorities said Wednesday.

The Bartow Middle School students were arrested Tuesday and charged with conspiracy to commit murder, possession of a weapon on school property, carrying a concealed weapon, and disruption of a school function, Bartow Police Chief Joe Hall said during a news conference.

According to officials, the 11- and 12-year-old girls said they were Satan worshipers and were going to drink the blood and eat the flesh of the students they killed. The girls then planned to kill themselves, they said.

The plan was foiled Tuesday after an automated call from the school notified one of the girls' parents that the daughter was missing from class, Hall said.

The 11-year-old spent the weekend at the 12-year-old's home, and on Sunday, after a day of watching horror films, "they devised a plot to kill several students" at the middle school, according to a police report.

The girls decided they would attend their first-period classes, then meet in a bathroom, where they would wait for smaller students and overpower them, according to a police report. They "did not want to attack larger students," the report says.

Using knives tucked under their clothes, the plan was to stab their victims and cut their throats, police say. The preteens conducted internet searches on how to kill someone with a knife and what type of wound would cause their victims "to bleed out the fastest," the police report says.

Upon killing each victim, the report says, they intended to stack her or him in a bathroom stall and wait for the next small student to enter the bathroom.

"After the students were dead, they would cut them up and eat parts of the dead flesh," the report says, adding that the girls aimed to kill between 15 and 25 students.

The girls then planned to kill themselves by stabbing, and they hoped that by killing their fellow students, "they would get to go to hell so they could be with satan," according to police.

The assistant principal found the students in a bathroom, Hall said, after one of the girls' mothers called the school to say the automated call reporting her daughter's absence must be a mistake.

They were taken to the principal's office, where the girls revealed four knives, scissors and a pizza cutter under their clothes, police said. Two of the knives had blades of at least 5 or 6 inches, photos provided by police show.

The girls also had a goblet from which to drink blood, authorities said.

Detectives searched the girls' homes and found a hand-drawn map that included the phrase, "go to killin bathroom" -- which marked the bathroom where they were found, police say. One of the girls had also scrawled violent lyrics from Eminem and Florence + the Machine on a sheet of paper, photos show.

One sheet of notebook paper also included a short poem: "trying hard to leave./stuck in a endless abyss./claw a way out, now," photos show.

A search of the girls' cell phones found Snapchat messages regarding the plot, according to a police report. The messages included, "We shouldn't have met each other lol. Now Death is near," and, "I was thinking like stabbing ourselves in the necks."

Additional police were already on campus because a student had notified a teacher of a rumored threat to students.

School staff responded quickly to reports of suspicious behavior, Superintendent Jacqueline Byrd said. There will be counselors and extra police officers at the school this week, Byrd said.