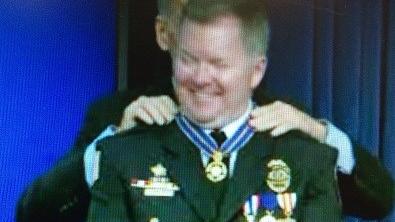 22 Public safety officers received the Medal of Valor Wednesday at a Washington ceremony. The medal is awarded to officers who exhibit exceptional courage to try and save or protect the lives of others.

Retired Oak Creek Police Lieutenant Brian Murphy and Oak Creek Police Officer Sam Lenda both were presented with a Medal of Valor in Washington D.C. Wednesday morning. The ceremony hosted by Attorney General Eric Holder and Vice President Joe Biden. Lenda and Murphy were among the first officers on the scene during the 2012 Sikh Temple shooting in Oak Creek.. Murphy was called up first as they recalled how he responded to the shooting at the temple. He survived that encounter, but was shot multiple times. Officer Lenda arrived on scene too and was able to fire at the suspect who eventually killed himself.

Among those honored, seven Watertown, Massachusetts, first responders who risked their lives during a gun battle with the two men accused of the Boston Marathon bombing, and five special agents who rescued a kidnapped boy in Alabama.