Two injured while attempting to clear disabled vehicle from interstate 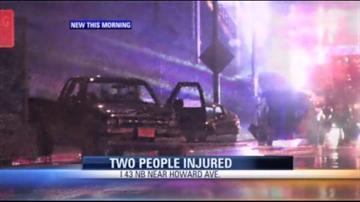 MILWAUKEE -- At least two people were taken to the hospital Tuesday night after being injured in a crash while trying to clear a disabled car from the highway.

The Milwaukee Fire Department says its crews responded to the call just after 10:30 p.m. on the off-ramp to northbound I-43 near Howard Avenue.

Paramedics took one person to Froedtert Hospital and a second person was taken from the scene in a private ambulance with unknown injuries.

The Milwaukee County Sheriff's Office says a vehicle struck a disabled vehicle that was being pushed on the ramp. The driver of the striking vehicle did not see the disabled car.

One of the people injured was a woman inside of the car who ended up on the roadway.

She suffered a head injury and was initially unconscious. Her status at the hospital has since improved, an official says.

The person pushing the car was not injured, according to the sheriff's office.