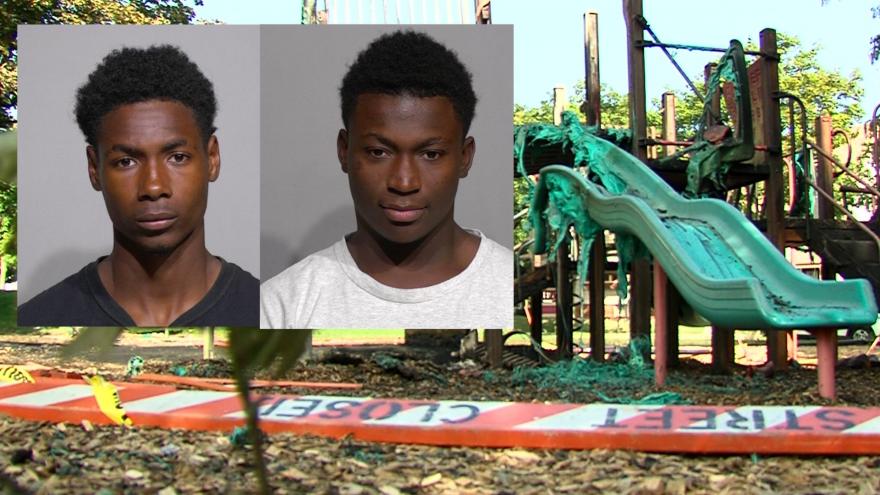 MILWAUKEE (CBS 58) -- Two Milwaukee 17-year-olds are charged after a playground was set on fire on September 1.

Trashun Campbell and Jaqueh Howell are charged with arson after investigators say they caused about $30,000 worth of damage to a playground at Butterfly Park.

When police tried to figure out what happened, someone who lives near the park told investigators a group of teens had been coming to the park every day and that the same group set a garbage can on fire on August 31. The complaint says police also arrested and questioned a 14-year-old suspect for setting a slide on fire the day before. The 14-year-old identified five people who were involved, including Howell and Campbell.

Police were able to take Howell and Campbell into custody through the help of another witness. The witness told police he saw Campbell light the fire and that Howell was throwing debris into the fire whenever it would diminish to try and reignite it. The witness said he later looked out his window and saw the park burnt and destroyed.

According to a criminal complaint, Howell and Campbell admitted to setting a jacket on fire and leaving the jacket near the slide.  Campbell told police the fire "got big for a little while" and remembered the jacket smoking but thought the fire was out. Howell said he saw the jacket smoking when he left the park, saying he didn't know the park equipment started on fire.

The complaint says Campbell also wrote a letter apologizing for burning the park down.

If convicted, both Campbell and Howell could spend up to three years and six months in prison and up to $10,000 in fines.