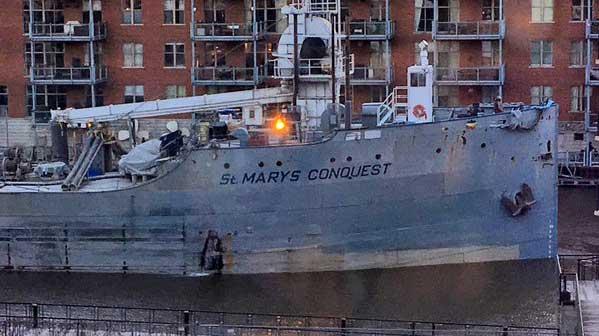 A tugboat helped pull St. Mary’s Conquest down the Milwaukee River around 9:00 AM Friday.

People living in the Historic Third Ward watched as the large vessel got some assistance. Witnesses say, the tugboat let the Conquest go once it was out of the channel.

Businesses in the Third Ward witnessed a rarity on Wednesday afternoon when a large ship moved through the Milwaukee River.

The Coast Guard told CBS 58 they have no cases of any ships or barges being stuck.

Boelter + Lincoln tweeted a photo of the St. Mary's Conquest around 4:00 PM with a caption that it was stuck.

The Water Street Bridge was not operating for approximately two hours causing the ship to be stuck, according to Bridge Operations.

The advertising agency told CBS 58 that as of 5:00 PM the ship was moving again.