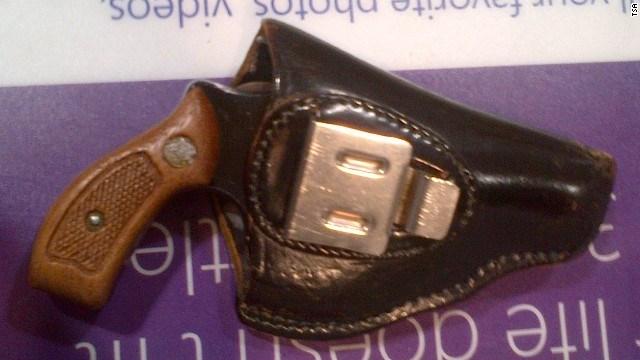 (CNN) -- Before you fly this holiday season, don't forget to remove your gun from your carry-on bag.

Not remembering could get you in trouble.

The U.S. Transportation Security Administration has seized a record 2,000 firearms from carry-on luggage this year, as of December 1.

That's more than the TSA has ever seized in any other full year of its existence. And we still have another month to go.

\"The vast majority of passengers have no nefarious intent but forgot their firearm in their carry-on bag,\" TSA spokesman Ross Feinstein wrote in an email.

Forgetting can be costly.

Passengers whose guns are spotted by TSA security during the screening process can be arrested by airport or local police and face criminal charges, and the TSA can impose civil penalties. And TSA Pre-check members can be temporarily or permanently banned from the expedited screening program.

\"It is a reminder that passengers should check their personal belongings before arriving at the TSA checkpoint, to ensure they do not have any prohibited items in their possession,\" Feinstein said.

If you need your gun at your final destination, don't just drop it into your suitcase and check that bag to your mom's house. Go to www.tsa.gov to find the TSA rules to follow for checking firearms and other weapons. There are also state and local weapons laws that vary by jurisdiction.

And it's not just about real guns. The TSA doesn't want you to attempt bring your firearm replicas, special gravy, cranberry sauce or super-special snow globes through passenger screening this December. Check them, ship them ahead of time or consider making your special sauce once you arrive.

Pies and cakes can go through passenger screening but may be subject to secondary screening. And a horror for Santa-believing parents everywhere: Presents may be unwrapped.