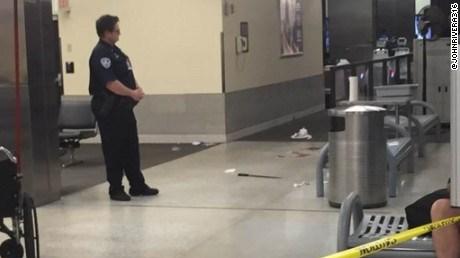 (CNN)A man armed with a machete and wasp spray stormed through a security area at Louis Armstrong New Orleans International Airport on Friday night before being shot, authorities said.

The incident started when White entered a security checkpoint for Concourse B and began spraying Transportation Security Administration agents and bystanders with a can of wasp spray, a sheriff's office statement said.

White soon pulled out a machete from his waistband and began wielding it at agents and others in the area.

One of the agents blocked the machete with a piece of luggage as White chased him through a security checkpoint metal detector.

At that point, Lt. Heather Slyve of the Jefferson Parish Sheriff's Office opened fire, shooting White in the chest, face and thigh.

One TSA agent was hit by a bullet fired by Slyve and was being treated for nonlife threatening injures, according to the TSA.

Several bystanders suffered minor injuries. Some ran into furniture, as they scrambled to get out of the way. One person was grazed in the arm by a bullet, Normand said.