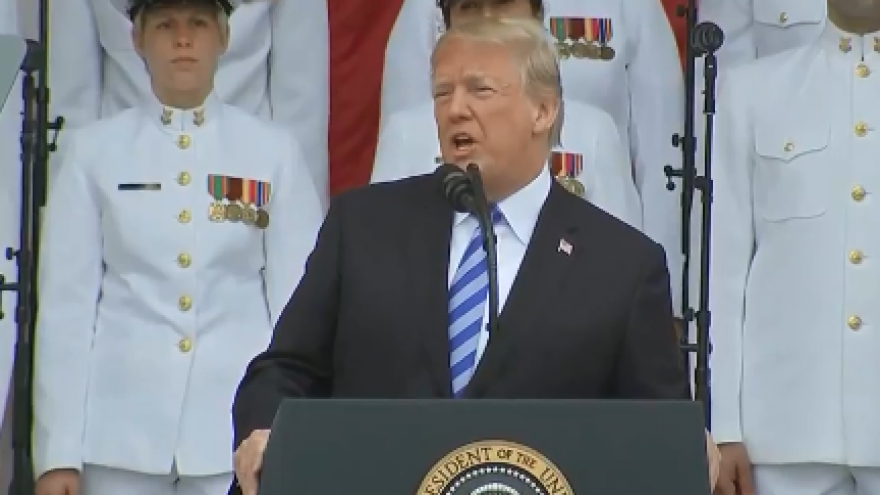 (CBS NEWS) -- President Trump joined Americans across the country as they commemorate Memorial Day on Monday, honoring the "lives and deeds of America's greatest heroes." "We pay tribute to their service, we mourn alongside their families," Mr. Trump said during remarks at Arlington National Cemetery. "We strive to be worthy of their sacrifice."

"They marched into hell so America could know the blessings of peace," he added.

Mr. Trump honored several families of those who were killed in battle, telling families at Arlington that the country "cannot imagine the depth of emotion this day brings each year."

"Today we ask God to comfort your pain to ease your sorrow and to wipe away your tears. This is a very special day, today our whole country thanks you, embraces you and pledges to you we will never forget our heroes," he added.

He also honored living heroes of America's wars, including WWII veteran and former Sen. Bob Dole of Kansas and Navy veteran Ray Chavez, who is 106 years old, making him the oldest living survivor of the attack on Pearl Harbor

"You are truly an inspiration to all who are here today," Mr. Trump remarked, saying Chavez "didn't look a day over 60."

Before his arrival, Mr. Trump tweeted a video message to mark the day, recalling his time at Arlington last year.

Happy Memorial Day! Those who died for our great country would be very happy and proud at how well our country is doing today. Best economy in decades, lowest unemployment numbers for Blacks and Hispanics EVER (& women in 18years), rebuilding our Military and so much more. Nice!

Mr. Trump tweeted later that "those who died for our great country would be very happy and proud at how well our country is doing today," touting his administration's efforts on unemployment, the economy and "rebuilding our military."