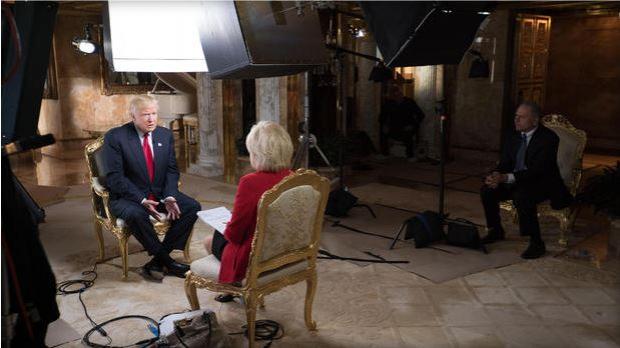 (CBSNews) Donald Trump is only days into being the country’s president-elect, and the questions are already piling up for him. In his first extensive post-election interview with “60 Minutes,” Trump answered questions about his policy priorities as president, including which areas might ultimately look a bit different than what he said on the campaign trail.

“It’s enormous,” he told correspondent Lesley Stahl with “60 Minutes.” “I’ve done a lotta big things, I’ve never done anything like this. It is -- it is so big, it is so -- it’s so enormous, it’s so amazing.”

Asked whether it took his breath away late last Tuesday night when he realized he would be the 45th president, Trump replied: “A little bit.”

“And I think -- I realized that this is a whole different life for me now,” he added.

As Trump adjusts to his post-election reality, there are  issues on which his post-election stances don’t quite match his campaign-trail rhetoric -- several of which he addressed with “60 Minutes.” Speaking about his potential picks for the Supreme Court, Trump was asked whether he supports same-sex marriage -- and he said he is “fine” with it.

On other issues, too, Trump signaled a willingness to depart from his previous campaign statements. Despite frequent cries of “Lock her up!” and “Hillary for prison” at his campaign rallies -- and his suggestion during the presidential debates that he would appoint a special prosecutor to look into Hillary Clinton’s private email server -- Trump said he has not decided whether to prosecute Clinton.

Clinton “did some bad things,” he said, but added that ultimately the Clintons are “good people.”

On health care, Trump said he is open to amending the Affordable Care Act or keeping pieces of it that are popular, such as coverage for people with pre-existing conditions or children under 26 who want to stay on their parents’ health insurance.

“It happens to be one of the strongest assets,” Trump said about insuring people with pre-existing conditions. “It adds cost, but it’s very much something we’re gonna try and keep.”

When it comes to immigration, Trump said his priority is to deport undocumented immigrants with a criminal record -- which he estimated would include 2 to 3 million people -- and said he is open for some of his famous border wall to be made up of fences instead.

“For certain areas I would, but certain areas, a wall is more appropriate,” he said. “I’m very good at this, it’s called construction.”

Trump, who met President Obama for the first time when Trump visited the White House last week, called the president “terrific,” adding that despite their differences of opinion he had a productive 90-minute conversation with Mr. Obama.

“I found him to be terrific. I found him to be-- very smart and very nice,” Trump said. “...Again, I never met him before, but we had -- we had a very good chemistry going. And -- and I really found -- it might not be that I agree with him, but I really found the -- the conversation unbelievably interesting.”

Trump said he believes he’s a “sober” person, not the “wild man” he believes the media has made him out to be. That, he said, was apparent in his serious expression while meeting with President Obama at the White House last week.

Trump said Clinton was gracious in congratulating him for his victory -- and despite referring to her throughout the campaign as “Crooked Hillary,” said Clinton is “very strong and very smart.”

“She couldn’t have been nicer. She just said, ‘Congratulations, Donald, well done,’” he said. “And I said, ‘I want to thank you very much, you were a great competitor.’ She is very strong and very smart.”

Does Trump regret the harsh and often vitriolic tone of the campaign? He says he doesn’t.

“I can’t regret. No-- I wish it were softer, I wish it were nicer, I wish maybe even it was more on policy, or whatever you want to say,” he said. “But … it really is something that I’m very proud of. I mean, it was a tremendous campaign.”

Still, Trump said he was “saddened” and “surprised” to hear that his supporters are inciting violence after his victory, especially targeting minorities or gay people. Asked whether he had any message for those supporters, Trump replied: “Stop it.”

“I would say don’t do it, that’s terrible, ‘cause I’m gonna bring this country together,” he responded. Told that they were harassing Latinos and Muslims, he added, “I am so saddened to hear that. And I say, ‘Stop it.’ If it-- if it helps. I will say this, and I will say right to the cameras: Stop it.”