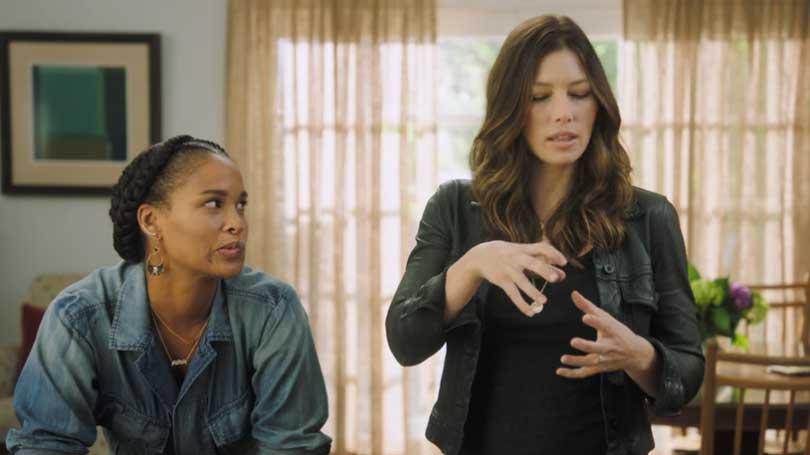 (CNN) The first time Aly Lovelace ever received any kind of formal sex education, she was 18 years old and a senior at a Texas high school. She'd been sexually active for four years and had had an abortion "completely alone" the year before.

Surrounded by "freshmen who didn't take the class seriously," Lovelace remembers being flooded with graphic images of sexually transmitted diseases and, since she was already sexually active, being compared to an already-chewed piece of gum.

"If you get to sex education after you've had sex, they make you feel like you're nothing; like you've destroyed your life," she said.

Bad experiences like hers, which still resonates six years later, make Lovelace grateful for the humorous "If you don't tell them, who will?" campaign launched this fall by WomanCare Global.

The campaign -- which includes a series of videos starring actresses Jessica Biel, Joy Bryant and Whitney Cummings sharing intimate details about their sex lives and birth control -- takes a "no topic is off limits" approach to women's health, according to Saundra Pelletier, the president emeritus of WomanCare Global.

The clips, released on the comedy website Funny or Die, aim to inform and entertain, and they contain an element of "shock value," Pelletier said.

Though they arrived there for different reasons, Pelletier and Biel collaborated on the project because they share a sincere desire to educate women about their bodies.

"Shocking raw statistics" -- like the fact that half of the pregnancies in the United States are unintended -- made Pelletier want to localize the global effort of her organization.

Only 22 states in the United States are mandated to teach sex education in schools," she said. Of those 22, only 13 have to teach curriculum that is medically accurate, according to the Guttmacher Institute.

Biel's interest came about because of what was going on in her personal life. When she decided she was ready to start a family, she realized just how much she didn't know about what her "cycle looked like."

"There's such a lack of education and such a huge amount of misinformation when it comes ... to women's reproductive health issues," Biel told NBC's "Today" show in October. Biel and husband Justin Timberlake welcomed a baby boy in April.

The campaign's latest installment of videos uses teenagers to try to dispel the myth that birth control makes women gain weight and helps to define what "real sex" really means.

"I was fascinated by it," Lovelace said when she saw the first set of videos, which covered condoms and intrauterine devices. She immediately contacted WomanCare Global and told the organization, "I'm so happy this is happening. I fully support you."

Pelletier said she's been overwhelmed at the response to the campaign from women like Lovelace. "I'm not the most emotional, touchy-feely person, but it was hard not to tear up," Pelletier said about reading feedback from women and girls of all ages and demographics.

Marla Etter, a mother in West Nyack, New York, said she has a very open relationship with her 15-year-old daughter and isn't embarrassed to talk about anything. But for parents who "can't get the words out of their mouths," she said, these videos are "genius."

Not everyone is impressed by the campaign, however. In an opinion piece for the New York Post titled, "Sorry -- nobody needs sex ed from Jessica Biel," writer Naomi Schaefer Riley said the questions Biel is answering are ones "that your doctor or WebMD could answer for you pretty easily. Do we need a video series to get us through?"

"Lack of information" isn't to blame for unintended pregnancies, Schaefer Riley wrote, adding that Pelletier's commitment to educating women about their bodies and contraceptives is due in part to the fact that she's a CEO of a biotech company that makes contraceptives.

According to its website, Pelletier's company, Evofem, focuses on "developing new reproductive health and wellness options for women." But Pelletier said the campaign plans to stretch far beyond discussing contraception and pregnancy into more emotional topics such as intimacy and body image.

"Knowing about your body is, and should be, directly related to how you feel about it," Pelletier said.

Lovelace agrees. "Understanding my emotions should have been a huge part of sex education," she said.