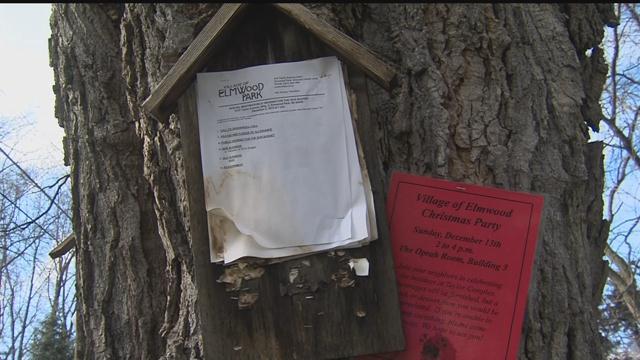 In this age of instant information, a Racine county community has been delivering messages in a very old fashioned way, but that tradition is about to disappear.

For more than half a century the only way people in Elmwood Park could find out what's happening they would look at the announcements tacked to a tree.

CBS 58’s Lindsey Branwall spoke with the village president on Wednesday. The president said that’s changing. A new law said they don't have to have these weathered pieces of paper all over town. They will now be using the internet.

Neighbors said it's been there for decades.

The Elmwood Park Village announcements were always tacked to this tree.

Ken and Mary Gallaher lived next to the old tree.

They said they don't see too many visitors at the tree.

But some neighbors still do one person said unhappy doesn't have computer, he used to read it.

Ken and Mary were happy to help, and they too know why the change outside their front window is bittersweet.

"It's like the end of an era,” said Gallaher.

The town notes will come down from this tree and another spot in town just about a block away on January 1.