'Toy Story': Five things you may not know 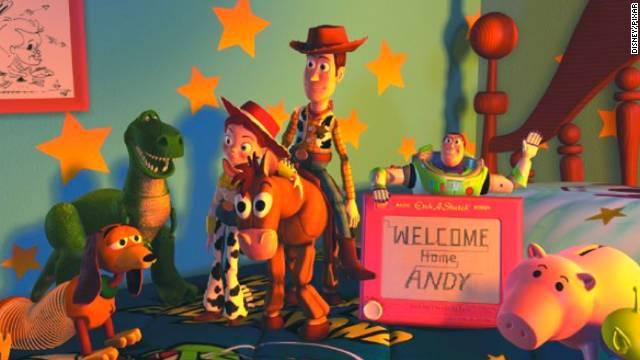 It's been almost 20 years since the first \"Toy Story\" debuted in 1995, but the franchise is still going strong.

On Thursday, Disney Chairman and CEO Bob Iger revealed that \"Toy Story 4\" is coming in June 2017 to the delight of pretty much everyone -- well, except those still grieving from \"Toy Story 3.\" (Our hearts seriously may never recover.)

But everyone else? Totally losing their minds.

Yeah, we know you're excited. But as this fan perfectly summed up the news, we've still got a looooong way to go until June 2017.

So let's take a trip down memory lane and revisit the movie that started it all, shall we? Here are five things you may not know about 1995's \"Toy Story\":

In 1988, Pixar created a short film using computer animation called \"Tin Toy,\" which told the story of a little toy soldier who was horrified by the babbling baby eager to play with him.

With that Oscar-winning short, Pixar's John Lasseter first started playing with \"this notion of a juxtaposition with the audience,\" as Lasseter puts it in the documentary \"The Making of Toy Story.\"

\"It's where you can show them something that they are so familiar with, and all of a sudden you can make them look at something from a different point of view,\" he explains. \"Like, looking at a cute little baby from a toy's perspective. From a toy, that (baby's) a monster! We were inspired from 'Tin Toy' with the ideas we developed there of toys being alive.\"

Pixar then played around with the idea of the \"Tin Toy,\" Tinny, being one of two stars of a toy-focused buddy movie. But when the animation studio landed on the idea of the movie being set in a kid's bedroom, where one new toy would come to join the older ones, it didn't quite add up that a kid would be that excited about such a simple plaything.

The action hero Buzz Lightyear is essentially a mashup of all of the Pixar team's favorite toys, and he was initially named \"Lunar Larry.\" (The team also tried out something like \"Tempest from Morph.\")

Tim Allen also wasn't the only actor under consideration for the part. In 2001, Billy Crystal admitted that he too had been offered the role.

\"It's the only regret I have in the business of something I passed on,\" Crystal said.

As for Woody, brought to life by Tom Hanks, that was inspired by John Lasseter's Casper the Friendly Ghost toy, which also had that old-fashioned pull-string.

Back in 2011, \"Toy Story 3\" director Lee Unkrich turned to Twitter to reveal some of the options that were floating around back in the '90s. (Unkrich served as an editor on the first \"Toy Story.\")

Some of the options were pretty straightforward, titles like \"Made in Taiwan\" \"Moving Buddies\" and \"The Cowboy & The Spaceman.\" And then there were some really creative ones, from \"Toyz in the Hood\" to \"Bring Me The Arm of Buzz Lightyear.\"

We're kind of a fan of the potential title \"To Infinity and Beyond,\" though.

According to Entertainment Weekly, November 19, 1993 was a dark day for Pixar's creative team.

That was when the studio presented a collection of story reels to Disney, whose animation chief was not at all into it.

Among the complaints was that action figure astronaut Buzz Lightyear and quaint cowboy Woody were just unlikable and had awkward chemistry. (In the words of Joss Whedon, \"The original Woody was a thundering a******.'')

To fix it, Pixar re-examined their two starring characters -- and listened more closely to the voices behind them.

\"We originally thought Buzz was a heroic kind of super space hero Dudley Do-Right who always does the big gesture,\" said producer Ralph Guggenheim. \"But that was a setup for a big fall. We listened to Tim (Allen's) recordings and wound up with a self-confident but modest space cop, a Sgt. Joe Friday who does his job every day.\"

And for Hanks' Woody, who originally was supposed to be the top toy who reigned over the bedroom from the top of the bed, Pixar toned down some of the sarcasm and made him less of a dictator.

\"When we moved him down to the floor with the other toys who looked up to him as Andy's favorite,\" Guggenheim said, \"he became one of the guys, more likable.\"

5. The license plate number on Andy's mom's minivan has a special meaning

Several Pixar fans make it a game to watch for hidden messages in the company's films, and the sequence \"A113\" is one of them.

According to Disney Insider, that was the room number for a class Pixar's John Lasseter, Brad Bird, Pete Docter and Andrew Stanton were all in at CalArts. You can spot that sequence on the license plate of the minivan driven by Andy's mom in \"Toy Story,\" \"Toy Story 2\" and \"Toy Story 3.\"