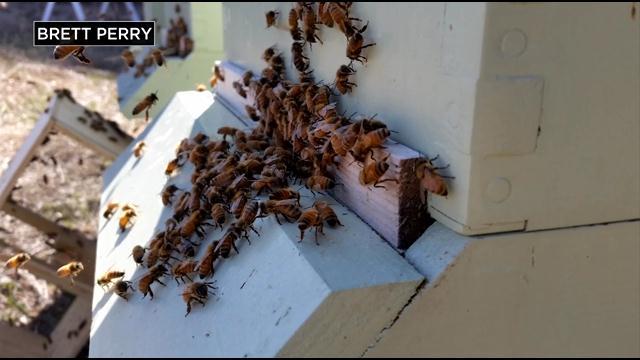 Wauwatosa residents can now keep honeybees in their back yards. The common council approved an urban beekeeping ordinance during a meeting April 7.

Perry has lived in Tosa for a decade and got into beekeeping three years ago.

\"Probably staying on the internet way too late at night,\" Perry said. \"You're either going to end up being a crab fisherman or a beekeeper.\"

Perry's always kept his bees in rural Waukesha County. But after the common council approved urban beekeeping, it cleared the way for guys like Brett to keep up to two hives in their yards.

\"We have continuously blooming sources of nectar for them,\" Perry said of the city. \"Out in the agriculture world you get crops that are very seasonal and in between those seasonal harvests, there's nothing for them to eat.\"

Tosa's ordinance keeps a pretty tight lock on who can keep bees where. Beekeepers need an annual permit and an initial inspection, keep hives 50 feet away from neighbors' porches and decks and must get approval from every neighbor whose property touches theirs.

\"I know more about bees now than I ever thought I would,\" Wauwatosa Alderman Bobby Pantuso said.

Pantuso thinks those strict rules kept most residents happy with the law, noting just one person complained to him.

\"I think people viewed that as, 'Hey, you know what? I guess I really don't have to worry about this because if I'm that far against it then I'm just not going to let any of my neighbors keep bees,'\" Pantuso said.

Pantuso says if there are issues, the city can always vote to revoke the ordinance. But people like Perry aren't worried that will happen.

\"They're already here,\" Perry said of bees. \"They live out in the wild. I think we can make this work.\"

People can start applying for permits immediately, but Pantuso doesn't expect more than a handful of people to try. In fact, Perry admits his yard is probably too small for his bees, but will look into what he can make work in Tosa.

You can read the full ordinance here.