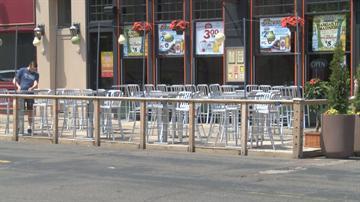 \"Business is tremendous, we can't even keep up,\" Lau said.

But the tiny Hawaiian restaurant on North avenue in Tosa can only seat 28 people inside and doesn't have a patio, so when the idea of street seating, or \"parklets\", came up, Lau expressed his interest.

\"People love to watch other people,\" Lau said.  \"So, we interact amongst each other.\"

The \"parklet\" concept popped up last year on Milwaukee's east side. In a similar fashion, Wauwatosa  would allow a select few North Avenue and village-area restaurants to install seasonal, fenced in table stations in parking spaces on the street.

\"Three, four, maybe five beautiful months of the year and you want to be able to draw that customer  to sit out on your patio,\" Alderman Bobby Pantuso said.

Pantuso recently pitched the idea to the city.  He says restaurants would need to apply for a permit and the city would have to approve designs.

\"We're talking one or two spots at the most each time, if this happens,\" Pantuso said.  \"Hundreds of places aren't  going to do it.  It's going to be a limited number of places.\"

Not everyone, like daily North Avenue diner Daniel Wilhelm, is sold on the concept.  \"People whizzing past you,\" Wilhelm said.  \"It wouldn't be my first choice at all.\"

Wilhelm says parking is already tough enough and he worries about safety.

\"Just seems like not a real bright idea, just because, a lot of traffic along here and  people rubber-necking, just doesn't seem real safe,\" Wilhelm said.

But Pantuso disagrees, pointing to lane changes and bike lanes coming this summer that would slow  traffic in theory.

\"It's no more unsafe than having tables on the sidewalk,\" Pantuso said.

This is still in its initial proposal stage.  Alderman Pantuso says if the city approves the idea, the earliest you'd see parklets would be in 2015.