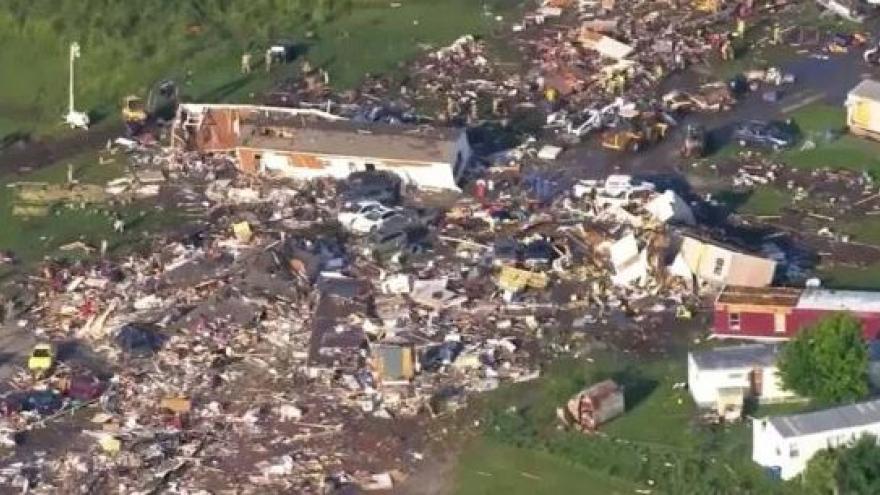 El Reno (CBSNEWS)— A tornado killed at least two people as it destroyed a motel, roared through a nearby mobile home park and caused other significant damage in the Oklahoma City area, officials said Sunday. A search-and-rescue operation was underway early Sunday, focusing mainly on the mobile home park.

El Reno Mayor Mike White said they are trying to confirm how many people were at the mobile home park and the hotel. There were 88 mobile homes at the park, White said, confirming there were several injuries.

The twister tore through El Reno, a city just west of Oklahoma City, on Saturday night as a powerful storm system rolled through the state, Rick Smith, a National Weather Service meteorologist in Norman, told The Associated Press.

"It is very traumatic — I think you will see in the daylight," White said at a press conference. He described the damage as "horrific" and "devastating."

The second story of the American Budget Value Inn was leveled, with White saying "it's just not there anymore."

Images from the scene showed emergency crews sifting through rubble after part of the motel's second story collapsed into a pile of debris strewn about the first floor and parking lot. Elsewhere, overturned cars and twisted metal could be seen briefly as intermittent lightning flashed across the sky and the wailing sirens of approaching emergency vehicles were heard in the distance. A car dealership was also damaged.

The National Weather Service said the likely tornado was part of a severe storm that passed through the state.

Saturday night's storm in El Reno comes after a week of tornados, severe rain and flooding in the Southern Plains and Midwest, including a tornado that hit Jefferson City, Missouri. The recent spate of bad weather and flooding in the region has been blamed for at least nine deaths. CBS Oklahoma City affiliate KWTV reported a suspected tornado also passed through Oklahoma City on Saturday.

The storm is the latest to hit the flood-weary central U.S. and dumped yet more rain in the region's already bloated waterways. In Tulsa, Oklahoma's second-largest city, authorities advised residents of some neighborhoods on Sunday to consider leaving for higher ground because the Arkansas River is stressing the city's old levee system.

Downriver and about 100 miles southeast of Tulsa in Arkansas' second-largest city, Fort Smith, authorities said Saturday that 100 to 200 people had already evacuated their homes due to flooding, which was expected to get worse in the coming days.