Titans to play for an NCAA National Title 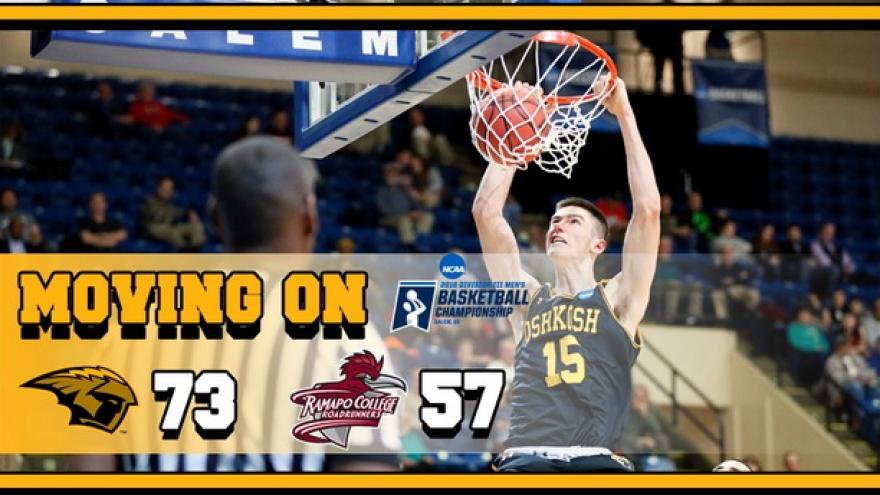 Adam Fravert, Brett Wittchow, Ben Boots and Jack Flynn combined for 63 points and 29 rebounds as UW-Oshkosh advanced to the final of the NCAA Division III Men's Basketball Championship with a 73-57 victory over Ramapo College (N.J.) on Friday (March 16) at the Salem Civic Center in Salem, Va.

Fravert recorded his eighth double-double of the season and the second this NCAA postseason with 21 poiints, 13 rebounds and five assists. He made 10 of 18 shots from the field, including a pair of second-half dunks that gave the Titans leads of 39-32 and 55-47.

Wittchow scored 18 points, including 11 in the second half, while totaling four rebounds and two assists. He converted 6 of 9 shots from the field, including consecutive 3-pointers that provided UW-Oshkosh with a 69-54 lead.

Boots reached double-figure scoring for the ninth straight contest by counting 13 points. He made three 3-pointers while grabbing three rebounds and notching a pair of steals.

Flynn tallied 11 points, nine rebounds and three blocked shots to finish just shy of his ninth double-double of the season.

UW-Oshkosh is appearing in its third straight NCAA postseason tournament and eighth overall. The Titans advanced to the semifinal round of the Division III Championship for the first time in school history. UW-Oshkosh previously reached the 1968 Final Four in the National Association of Intercollegiate Athletics, finishing third in Kansas City, Mo.