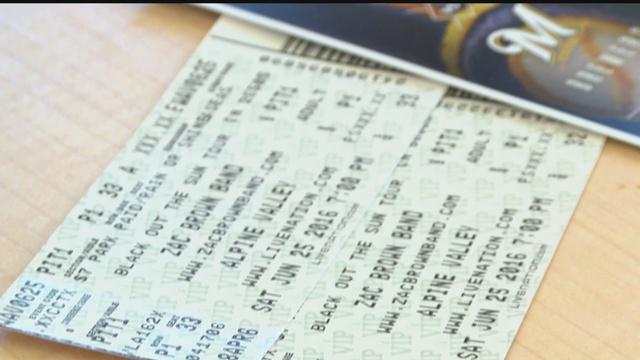 This week Ticketmaster began offering refunds to its customers following a settled lawsuit claiming it overcharged for shipping and hid processing fees. But some customers receiving those refunds aren't happy with what they're getting.

It seems like a good deal; some of these customers are getting as many as 35 ticket vouchers. But as you can see on their redemption website, the concerts where you can use them are sold out across the country.

Here's what Ticketmaster is offering customers.

If you had those tickets shipped by UPS? An additional five dollar credit for each.

You'll also receive one voucher for two general admission tickets to select concerts happening in the next year.
But Jim Bryce with Milwaukee's Ticket King says this is just a win for Ticketmaster because the free shows sell out almost as soon as they're posted.

"I'm just going to say that's something people are going to see a lot and be frustrated by. Now you can use the $2.25 voucher, two of them, for another show, but you know, if you're spending 200 dollars you're getting $4.50 toward it. I mean it doesn't seem like that good of a deal to me," he said.

Important to note: regardless of how many tickets you purchased in that time frame, you can only get up to 17 of each voucher.