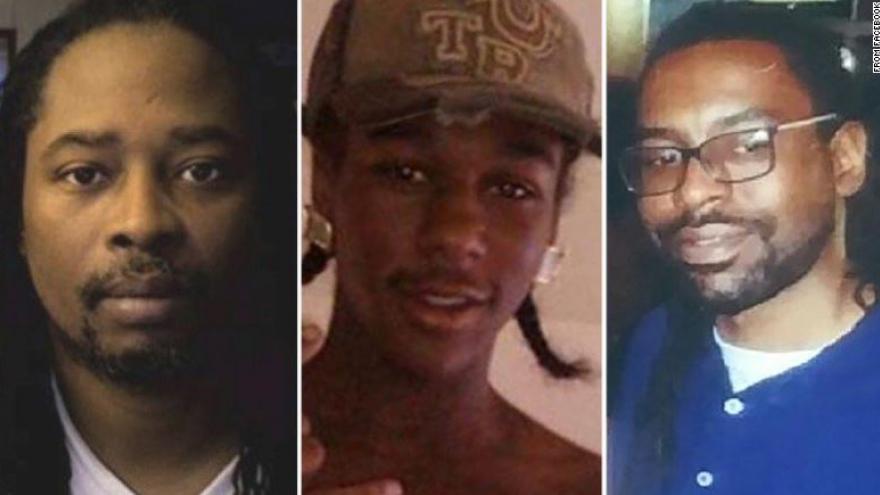 (CNN) All three cases started with a traffic stop.

A black man is pulled over by a police officer.

He was missing a front license plate. For suspicious activity. Because a cop thought the driver looked like a robbery suspect.

Regardless of the reason, the outcome was the same for Samuel DuBose, Sylville Smith and Philando Castile -- none of them survived.

The police officers fired their weapons, saying they had feared for their lives.

The three shootings were on video, which was scrutinized by lawyers and repeatedly played before the jurors.

All three of these cases came to a head last week without any of the former police officers found guilty. Two were acquitted and one trial ended in deadlock.

Prosecutors haven't had much success convicting police officers in high-profile cases, even when the shooting is on video.

In May, Oklahoma police officer Betty Shelby was acquitted in the shooting death of Terence Crutcher, an unarmed black man.

The lack of convictions has riled advocates and victims' families who say the system is stacked in favor of law enforcement and disregards black lives.

An Ohio jury deadlocked in the trial of former University of Cincinnati police Officer Ray Tensing, who fatally shot Samuel DuBose during a traffic stop in July 2015.

This prompted the judge to declare a mistrial Friday for the second time in a trial of Tensing. A jury could not come to agreement last November and the judge also declared a mistrial then.

Tensing pulled over DuBose because of an allegedly missing front plate. He asked DuBose for his driver's license, which was suspended. When DuBose couldn't find it, Tensing grew frustrated and asked the motorist to undo his seat belt.

Tensing, a 27-year-old officer with five years' experience, tried to open the Honda Accord's door. But DuBose held it shut. After that, Tensing reached into the car -- and at that moment, his body camera shook out of focus.

DuBose was shot in the head. His car rolled for about a block before crashing. He later died.

Tensing testified he shot DuBose because he feared for his life after his left arm became trapped inside DuBose's moving car on July 19, 2015.

Prosecutors broke down the body camera video frame-by-frame to rebut Tensing's assertion that he was being dragged down the street.

After the jury deliberated for 30 hours, they informed the judge: "We are almost evenly split regarding our votes towards a final verdict."

It's unclear whether prosecutors will press for a third trial.

Smith was killed while running from a traffic stop last August. Body-camera footage showed him heading into a yard with a weapon in his hand, according to the criminal complaint.

He ran near a chain-link fence between two houses. Facing the cops, Smith raised the gun up and threw it over the fence, the complaint said. His weapon was not discharged.

Body-camera video from another officer -- played for the jury last week -- showed that Heaggan-Brown shot a second bullet into Smith's chest after the suspect hurled his weapon over a fence and had his hands near his head.

The jury made its decision to acquit the former cop in just under 10 hours of deliberation.

Milwaukee exploded in protests after Smith's death. For two nights, protesters torched a half dozen businesses, smashed cars and hurled rocks at police.

A jury delivered a not guilty verdict in the manslaughter trial of Jeronimo Yanez, the Minnesota police officer who fatally shot Philando Castile during a traffic stop July 6 in the St. Paul suburb of Falcon Heights.

An audio recording captured Castile telling Yanez he had a gun in the car, and the officer telling Castile not to reach for it. Seconds later, Yanez opened fire. The shooting was captured on a dashcam video.

Prosecutors portrayed Yanez as a nervous officer who lost control of his traffic stop. He was too quick to pull the trigger after learning Castile had a gun, based on an unreasonable suspicion that he was a robbery suspect, they said.

Yanez testified he feared for his life because he believed Castile was pulling his own gun from his pocket. He didn't want to shoot Castile, but did so because "I thought I was going to die."

Immediately after the shooting, Castile's girlfriend recorded a gut-wrenching video that was posted to Facebook Live.

The jury reached its decision after 27 hours.