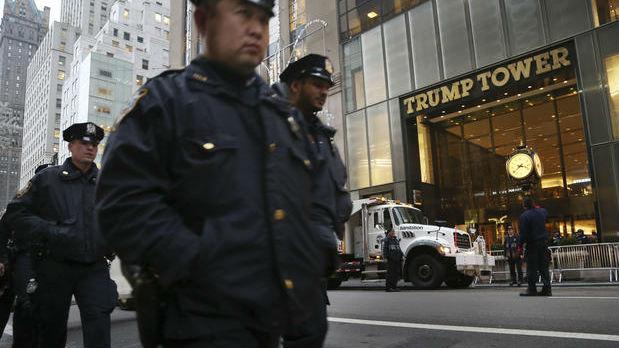 (CBSNews) -- There were protests throughout the U.S. on Wednesday after Donald Trump’s surprise election victory.

Protests were planned Wednesday evening in New York, Trump’s home city. The proposed protests were set to end in front of his home at Trump Tower on 5th Avenue.

The signs of his victory were evident in New York, where security barricades were placed in front of Trump Tower.

In Chicago, hundreds of protesters have gathered outside Chicago’s Trump Tower to express their disapproval of the election results.

Authorities say police have been stationed outside the hotel and condominium tower since early Wednesday, when it was apparent the Republican Trump had defeated Democrat Hillary Clinton in their presidential contest.

The protest was organized by the groups Freedom First International and the Southern Christian Leadership Conference, among others. The organizers contend the protest is designed to show solidarity with Muslims, women, LGBTQ people, poor and working people and Black Lives Matter.

CBS Chicago reports event was billed as an “emergency protest,” and thousands had signed up via Facebook. The demonstration started at 5 p.m. and was expected to last until 9 p.m.

A different event had been planned by another Facebook group — to “Point and Laugh at Trump Tower” the day after the election.

The organizer made some last-minute changes, given Trump’s unexpected victory.

In Boston, protesters chanting “we will not be silenced” and carrying signs reading “He Will Never Be My President” gathered on the steps of the Massachusetts Statehouse following Republican Donald Trump’s presidential election victory.

Many of those chanting and singing hailed from Boston-area colleges and said they were shocked and disillusioned by Democrat Clinton’s loss.

“We were so close to seeing the first woman become president and she lost to a man who has no political experience, who doesn’t represent the majority in this country,” she said.

Matthew Bittner said he was in utter disbelief with Trump’s win.

He said he knows Clinton isn’t perfect, but said he felt like people didn’t want her in office because she’s a woman.

“There’s so much bigotry in this country that we thought was resolved but it was just covered with a blanket,” said the 21-year-old theater student from Suffolk University. “He wants to bring back a sexist, racist, homophobic, xenophobic society and we will not stand for it.”

The two were among hundreds who flocked to the Statehouse holding signs that read “Make Bigots Afraid Again,” chanting “I’m still with her” and singing The Beatles’ “All You Need is Love.”

Massachusetts, a reliably Democratic state in presidential elections, handed its 11 electoral votes to Clinton on Tuesday. The last Republican presidential candidate to win Massachusetts was Ronald Reagan in 1984.

Nineteen-year-old Robert Duncan, who is black and a musical theater student at the Boston Conservatory, said he is gay and sees Trump as an oppressor.

“He’s said awful things to people of all different kinds,” Duncan said. “I’m here because I just want to get all my emotions out honestly. I’m sad. I’ve been crying all day.”

Many of those protesting said despite Trump’s victory, they have their eyes on the future.

“For the next four years, we just have to do what we can,” Schaefer added. “We can’t throw away our shot. We’re young. We’re educated. We can make a difference the next time around.”

About 200 students at Carl Hayden High School chanted “Out Donald Trump” as they left school around noon. The high school is located at 35th Avenue and Roosevelt Street.

Students were seen holding signs and the Mexican flag as they marched to the Arizona State Capitol where they gathered outside the building and then walked a circuit around the plaza. Many of the signs expressed anti-Trump and anti-Sheriff Joe Arpaio sentiments.

Arpaio was defeated by Democrat Paul Penzone after 24 years in office.

Phoenix police officers were in the area to keep the students on the sidewalks and unharmed. The protest has remained peaceful.

A small group of students gathered in front of City Hall in downtown Phoenix.