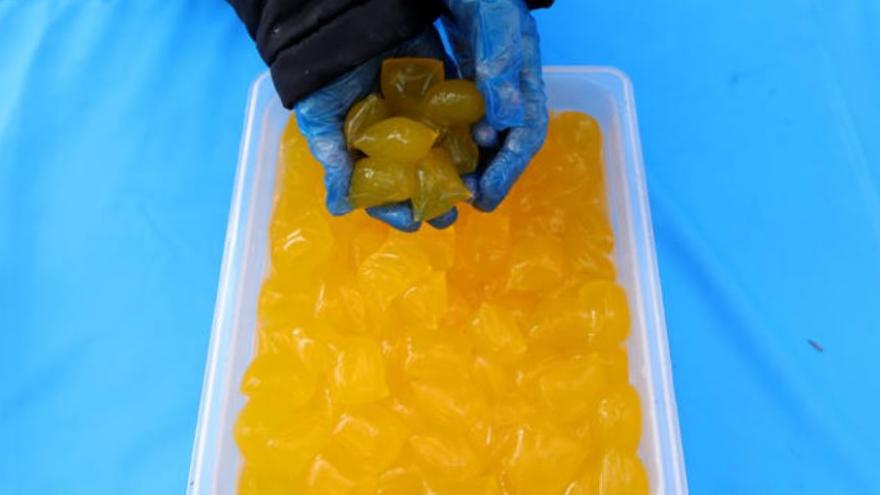 Typically, the aftermath of a marathon is a sea of plastic waste. But in an effort to make the event more sustainable, the London Marathon will replace thousands of plastic water bottles with edible seaweed pouches this year.

More than 40,000 people plan to run the marathon on Sunday. And they're in for a bit of a different experience when they reach Mile 23 — Ooho seaweed capsules instead of plastic bottles or cups. The capsules can be filled with a variety of liquids, but the ones provided at the marathon will be filled with Lucozade Sport, an electrolyte drink.

The small pods are made by the London-based startup Skipping Rocks Lab. They are designed to be both edible and biodegradable — the pods themselves are tasteless, and if not consumed, they biodegrade within six weeks.

According to London Marathon Events (LME), the marathon will be the largest ever trial of the Ooho pods. More than 30,000 capsules will be given to runners at Mile 23, who can grab them from volunteers and simply bite down to release the liquid. According to Lucozade, "the experience is similar to eating a cherry tomato."

LME says it is committed to being zero-waste by December 2020. "We are passionate about the concept of Eliminate, Reduce, Reuse and Recycle and fully committed to reducing our environmental impact," said Event Director Hugh Brasher. "We believe we run the best mass participation events in the world and we want to match that by leading the world in mass participation event sustainability."

Ooho pods aren't the only way the London Marathon is tackling sustainability:

A number of other sustainable measures are being tested this year, including eco-efficient tower lights, clothing donation collection for discarded items, 100 percent recyclable bottles, digital race materials and the elimination of goody bags after the race.