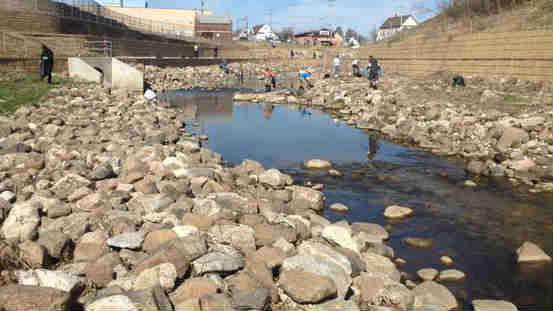 Thousands of volunteers helped clean the Milwaukee and Kinnickinnic River Saturday.  It was the 20th annual Milwaukee Riverkeeper river cleanup.

Antonio Garcia grew up on the south side of Milwaukee. This was the first time he participated in the cleanup.

\"Cheetoh's bags, a lot of stuff from McDonald's,\" Garcia said. \"Growing up in this area, there was so much trash, it kind of became the norm. Once you clean it up and see the beauty behind it, it makes a difference, makes you want to keep doing it.\"

Cheryl Nenn is one of the main organizers as the Milwaukee Riverkeeper.

\"They're kind of the lifeblood of our community,\" Nenn said. \"A lot of the trash is not only esthetically bad, it also can get in to the rivers and be ingested by wildlife.\"

Volunteers spread out to 50 sites throughout the city for the cleanup.

\"I think people driving around the city can see it's really trashy.\"

There will be more cleanups planned throughout the next several months.