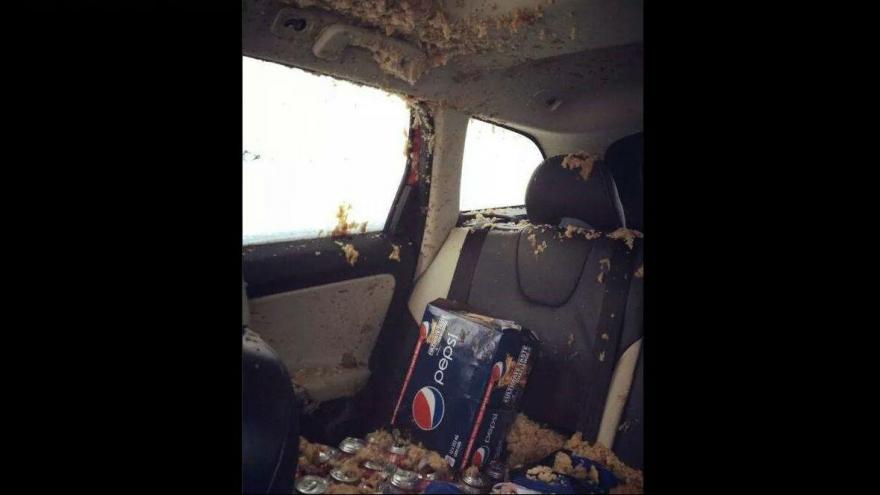 (CBSNews) The temperature in Lincoln County, Montana is hovering around the low twenties and teens this week. And in temperatures that frigid, leaving groceries in the car may be the last thing on a person’s mind. If those groceries contain soda cans, however, leaving them in your car can lead to a very messy situation.

That’s way the Lincoln County Sheriff’s Office took to their Facebook page with a cautionary tale (or rather, cautionary image) about what happens to soda cans when they freeze.

“A friendly reminder for you all.....don’t leave your carbonated drinks in your vehicle when it’s this cold outside, especially over night!!!!” they wrote along with the Facebook post.

The phenomenon of frozen soda cans exploding is nothing new. In fact, YouTube is full of it. And it doesn’t necessarily occur for the reason you’d thing.

According to LiveScience.com, “Frozen soda can explosions are not due directly to water expanding as it freezes, but to the resulting pressure put on an isolated pocket of C02.”

The problem, however, isn’t just that it can be messy. It can be dangerous too. In August 2012, for example, a frozen soda can exploded while in a little boy’s hand in China. His mother reported on China’s Twitter-like service Sina Weibo that her son retrieved the can from the freezer, went to open it and then the can exploded, lodging shrapnel in his cheek.

That’s an extreme example, but as the Lincoln County Sheriff’s Department points out, it’s better to be safe than sorry. While the weather outside remains bitterly cold, make sure your soda cans make it into the house. That way, “soda pop” remains an onomatopoeia, not reality.