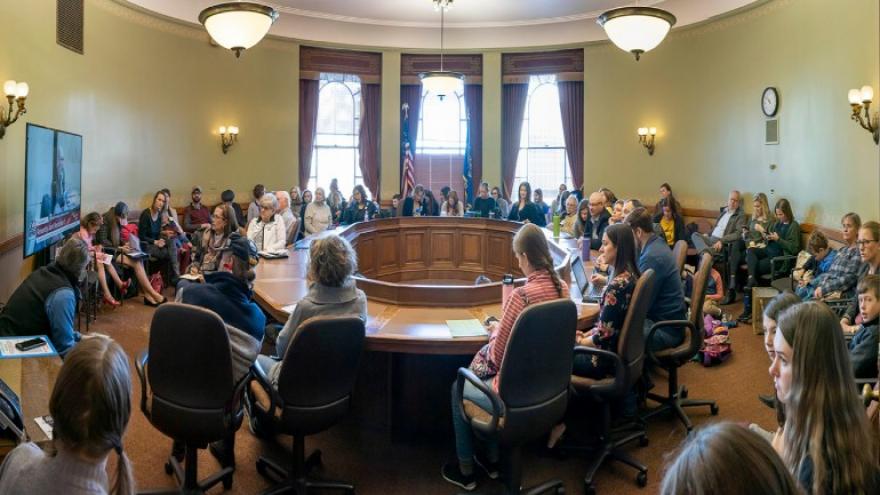 MADISON Wis. (CBS 58) -- Dozens show up at the state Capitol without face masks, regardless of a statewide order that requires them in public buildings.

Nearly 100 people arrived at the Capitol to show their support for a pair of bills to ban mandatory vaccinations in Wisconsin.

“There are hundreds of people here today, so we hope that speaks volumes to our governor,” said Erin Runk, Wisconsin United for Freedom, a group who testified in support of the bill.

Dozens of people packed a committee hearing room that was used as an overflow area to watch the committee hearing where the proposals were discussed. Many were unmasked and ignored social distancing guidelines.

Senator Melissa Agard called it “reckless and dangerous” when reacting to seeing a large group of people not wearing face coverings at the Capitol.

Dozens of people are at the capitol to testify on two bills to prohibit government officials and employers to mandate a COVID-19 vaccine. Another proposal would ban churches from closing during the pandemic. pic.twitter.com/AziyMLlzja

“We are nearly a year into this pandemic, and this is what we are seeing in the state Capitol today: no masks, no social distancing, and no safety precautions for the staff who have no choice but to be in the building,” said Agard.

The Department of Administration, which oversees the Capitol, requires the public to wear masks, but it’s not enforced for lawmakers and their staff. Some Republican lawmakers are often seen not wearing them, but others do and typically remove them when speaking.

The proposals that generated the large crowd would prohibit employers from requiring their staff to get the COVID-19 vaccine. This was previously introduced and included in the COVID-19 relief bill Gov. Tony Evers vetoed last month, calling it one of several “poison pills” added to the legislation.

Another proposal would ban vaccine mandates from state and local governments such as the Wisconsin Department of Health Services (DHS). A DHS spokesperson said they have no plans to require the vaccine, but by law, they could under a public health emergency order.