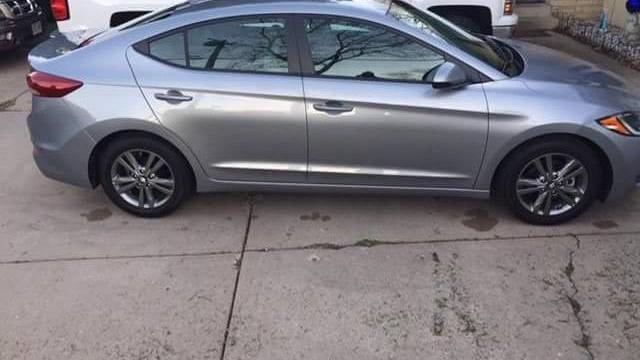 Someone stole a woman's brand new car the day before Thanksgiving.

Inside were prized possessions that she wants back. Since it was stolen, it has been spotted on Appleton and Hampton Avenue in Milwaukee.

The owner of the car is six months pregnant, and worries she'll never get the first pictures of her baby back.

"I noticed that I left my water and my banana in the house. Because I am pregnant, I wanted that banana," said Michelle Balistreri.

Balistreri was on her way to work Wednesday morning.

"As I'm coming down, I kind of hear the car door slam as if they're pulling out of my driveway, and I come outside and my car is completely gone," said Balistreri.

"My baby's ultrasound pictures were in there as well as my daughter's brand new thanksgiving outfit, her brand new shoes, some of her toys," said Balistreri.

Balistreri can't replace those first pictures of her baby, and her 7-year-old daughter misses her toys.

"For her to be upset as she was because her things were missing was just heart wrenching," said Balistreri.

Balistreri's daughter Kennedy couldn't hold back tears during our interview.

Balistreri spotted the car on Thanksgiving morning. She saw her car drive past her house with four teenagers inside.

Balistreri's fiance, Ryan Braby, has also had friends who have spotted the car.

Those spotted in the car are four black skinned teenage males. Three of them have dreadlock style hair, and the fourth has a fade hair cut.

The car is a 2017 Hyundai Elantra, blue/gray in color with the license plate starting with "266."

"If you see a group of young kids in a brand new car you kind of have to do the math they probably don't own it and we want it back," said Braby.

She's hoping the teens who stole the car will stop and think.

"They would see the kids clothes, they would see the ultrasounds, the appointment notifications in there and have some sort of sense to say okay, '...we just stole a pregnant woman's car maybe we should get it back or dump it somewhere,'" said Balistreri.

The family hopes to get the ultrasound pictures back, along with their car and daughter's belongings. They are offering a reward.