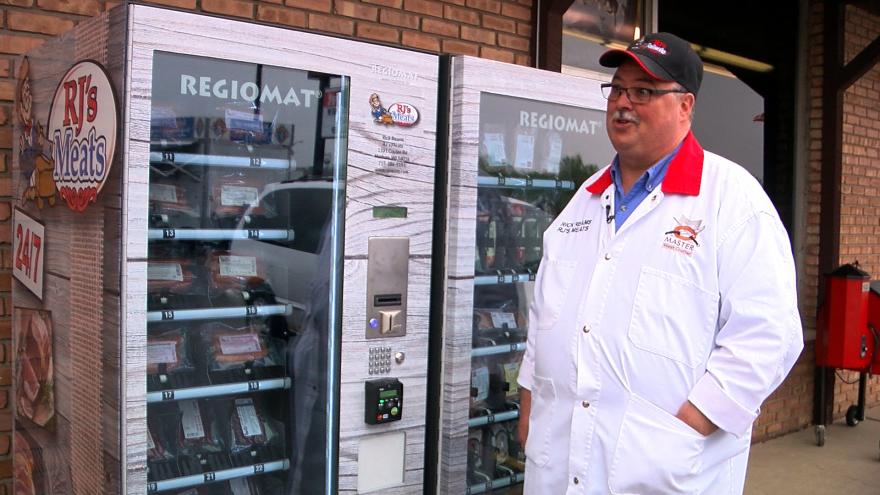 RJ’s Meats is now selling its bacon, brats and other cuts of meat out of a vending machine.

Owner Rick Reams has seen demand for his prime cuts and quality beef grow over his 30 years as owner.

“Small business like ours, we’re seeing a lot of people are coming back to the butcher shops, where they can, as they say, trust me,” Reams said.

However, in a 24/7 society, Reams can’t accommodate every customer.

To make his hours more convenient, he turned to a popular product out of Europe that offers a twist on the traditional vending machine.

“I’ve been waiting four years for this so I’m pretty pumped,” Reams said.

The Regiomat isn’t built for candy bars or potato chips. Instead, the refrigerated vending machine is designed to dispense fresh meat.

“It’s unlike the U.S. vending machines in that it’s heavily insulated and has a heater in it,” he said. “It can actually dispense products when it’s 20 below outside.”

Reams stocks the shelves with bacon, brats, potato salad, cheese curds and even seasoning. The shelves expand and contract to fit a rotating cycle of products.

He hopes to soon have the packaging to offer fresh cuts of meat in the vending machine.

Reams is the first to own a Regiomat machine in the United States.

“I look at it as another way for me to serve customers when I can’t be here for them,” Reams said.

He knows the concept may take some getting used to, but the convenience is undeniable.

“I think that’s pretty cool,” said customer Tim Ross. “I think it’s probably going to get some use.”

The price for the vending machine product is the same as inside the store.

The machine takes both credit cards and cash.