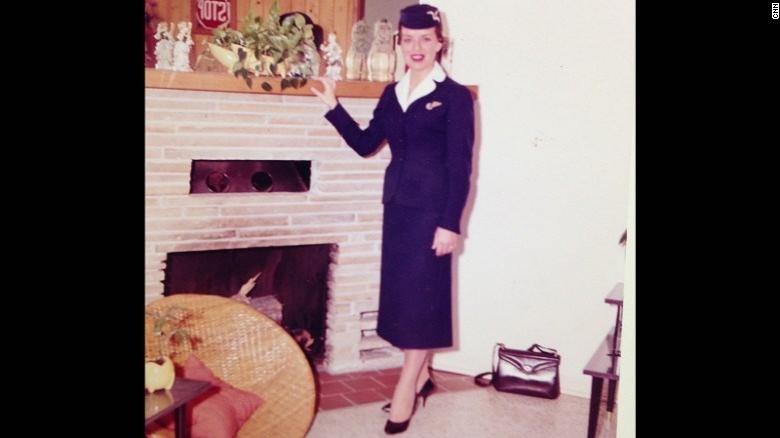 (CNN) For nearly six decades, Bette Nash has been sharing her contagious smile with the world -- from 30,000 feet.

This makes it quite possible that she's the world's most senior flight attendant, still flying.

"The Kennedys used to fly with us," Nash reminisces, while preparing drinks on her daily route from Washington National to Boston Logan on American Airlines.

It's her regular route, and her passengers are friends. Greetings include a hug and a sincere inquiry on how they're doing.

It's clear: Bette Nash is really piloting this plane.

It was the romance and glamor of flying, a respectable career, that attracted her initially.

"I wanted to be a flight attendant from the time I got on the first airplane -- I was 16 years old, I was sitting with my mother on a green leather couch at Washington [Reagan National Airport], and this crew came up from TWA.

"The pilot and the flight attendant walked across the hall and I thought 'oh my God,' and I said that was for me," Nash recalls.

Nash went on to get a college degree, but she never deviated from her dream.

She applied for a job as a stewardess, as flight attendants were then known, shortly after graduating.

Nash started her lifelong career with the now-defunct Eastern Airlines on November 4, 1957.

"And the rest is history," she says with a large grin, peering over her happy customers enjoying their drinks in the first-class cabin.

And that stretch of history has seen a lot of change in the world of aviation.

Flying today is a far cry from the white-gloved glamor of the golden age that Nash remembers.

When she first took flight, planes were a place of luxury -- almost a vacation in itself. It was a sophisticated party in the air, where everyone wore their Sunday best and ate lobster on real china.

"You worked harder physically in those days," Nash recalls. "We served this big meal tray. And I was the only one on the plane, so I had to take care of everybody."

Today, glancing around the tightly packed plane, her workload is still significant, only now it involves serving drinks to hundreds, instead of full meals to a few dozen. But Nash still loves it just as much.

"I love my people. I know my customers. I know what they want. The airline thinks names are important, but I think people's needs are very important. Everybody wants a little love," she says.

Before Nash began her journey as a flight attendant, she first had to look the part.

"People called it 'Charm School' in those days," Nash recalls. "They took you to the beauty parlor and cut all your hair off and plucked your eyebrows."

According to Nash, the airline also had a beautician teach flight attendants about makeup -- mascara was allowed, eyeshadow wasn't.

You also couldn't be over a certain height and weight.

"They would take people off the payroll if they weighed too much. Or they'd give you a week or so to lose it," Nash recalls.

Today, there are no height or weight requirements in the US, but the airlines still dictate what you wear.

And Nash has seen outfits change with the mood of each era. When she first started, the attire, like the minimalist makeup, was very conservative.

And some trends didn't last long. "About '65 or '64 or so, they came out with a royal blue uniform. It was a designer uniform from Ben Reig. We had a hat and everything but it was so blue and people couldn't stand it. It lasted one year," she says.

Around 1970, Nash explains, the look started getting a little radical, with pantsuits, bold colors, short dresses and really big hair.

"At one point, we even went to hot pants. We had the hot pants, the go-go boots, a turtleneck shirt that came up to here and buttoned underneath. After that, then things started calming down a little bit."

But nothing's changed more in the industry than technology. When she first began flying, all flight schedules were chalked up on a blackboard, and manuals and regulations came in book form.

Today, everything is on a screen, and for Nash this has been a big adjustment.

American Airlines was the first US airline to replace all paper manuals with tablets and iPads. All of the inflight announcements are read from the tablet now, which was a major challenge for Nash, as she's not the most tech-savvy, she admits.

"Technology really made the difference of, 'Am I going to stay or am I going to go?' But even when I think I might retire or something, then I come to work and think, 'Oh, I couldn't do that.' It's stimulating coming out here," Nash says.

"The airlines are evolving continuously, and you have to evolve with them."

As she's tidying the plane up for landing back in Washington, she chats with some regulars, adding a little laughter to the cabin atmosphere.

She chuckles when asked whether she thinks technology will replace her.

"They will never phase out a flight attendant, because they need the human touch. People need that human interaction," she explains.

A lot has changed with the airline industry in the past six decades, but there's one thing that technology hasn't changed: the friendly faces of the cabin crew who greet you as you board the aircraft.

Nash still wears that smile like a badge of pride, and she shows no signs of quitting the skies anytime soon.