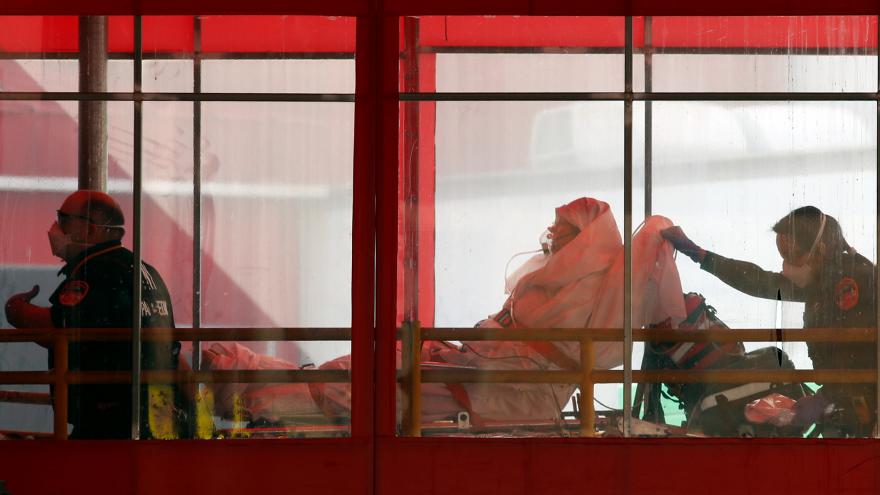 (CNN) -- The US war against coronavirus took a devastating turn this week. But with more people taking social distancing seriously, new modeling predicts the coming months won't be as dire as initially feared.

A record 1,858 deaths were reported in just one day Tuesday. Since the US outbreak started, more than 399,000 people have been infected, and more than 12,900 have died.

And researchers say the peak has yet to come.

The US will reach its highest daily number of deaths on or around Sunday, according to modeling by the Institute for Health Metrics and Evaluation at the University of Washington in Seattle.

The projections also suggest the US will reach its peak use of resources -- such as hospital beds and ventilators -- on or around Saturday.

But there's a bit of good news: The modeling shows fewer people will die from coronavirus than previously expected.

On Tuesday, the IHME estimated about 82,000 people will die from coronavirus disease by August. On Wednesday, that estimate was lowered to 60,415.

Still, that's little consolation to the countless families grieving for loved ones who often die alone in hospitals.

And the actual number of deaths could be higher than we know.

Some deaths due to Covid-19 "may be misclassified as pneumonia deaths in the absence of positive test results," the US Centers for Disease Control and Prevention said.

The virus is disproportionately affecting minority groups, and tracking that data is important to warn those most at risk, said American Medical Association President Dr. Patrice Harris.

Vaccines typically take years before they're publicly available. But officials are racing to develop one for Covid-19 as quickly as possible.

Dr. Anthony Fauci, the director of the National Institute of Allergy and Infectious Diseases, said it might be possible to have a coronavirus vaccine in 12 to 18 months, but some experts say that timeline is risky.

Biotechnology company Inovio started a Phase 1 clinical trial this week and estimates that will be finished late this summer, a spokesperson for Inovio told CNN.

"We anticipate rapid enrollment of this initial study," said Dr. Pablo Tebas, an infectious disease specialist at the Hospital of the University of Pennsylvania and the study's principal investigator.

"There has been tremendous interest in this vaccine among people who want to do what they can do to help protect the greater public from this pandemic as soon as possible."

In the meantime, the US Food and Drug Administration expedited the use of blood plasma treatment for seriously ill patients last month.

This week, Jason Garcia -- a man who recovered from coronavirus -- was told his plasma donation has been distributed so the antibodies he developed can help another patient do the same.

Garcia said doctors told him a patient had since improved.

Millions of Americans are suddenly unemployed

More than 6.6 million US workers have filed for their first week of unemployment benefits as coronavirus cripples the economy.

In New York, the state with the most cases and deaths, officials estimate a loss of $10 billion to $15 billion in revenue.

"New York State is broke," Gov. Andrew Cuomo said Tuesday. "I urge you to keep fighting for New York State to ensure we have the resources we need to continue to lead the fight against Covid-19and provide the services New Yorkers rely upon."

Tennessee has seen a "record spike" in unemployment claims of more than 250,000 in the last three weeks, Gov. Bill Lee said.

In Oklahoma, about 135,000 residents filed for unemployment, the Oklahoma Employment Security Commission said.

In West Virginia, Gov. Jim Justice said an additional $600 would be distributed to those who lost their jobs.

When can students go back to school?

Several states have closed schools for the rest of this academic year. Now many parents are wondering whether they students can go back to class in the fall.

Fauci said it's still too early to know, but he's optimistic the country will be in better shape by the next school year.

"I fully expect, though I'm humble enough to know that I can't accurately predict, that by the time we get to the fall that we will have this under control enough," he said.

But the reopening of schools will likely depend on how soon coronavirus cases start to dwindle and how well the US can identify those with the disease or who have recovered from the disease, including those who were asymptomatic.

Knowing who is protected and who is vulnerable will help communities make decisions about using classrooms again.

"My optimistic side tells me that we'll be able to renew to a certain extent, but it's going to be different," Fauci said. "Remember now, because this (disease) is not going to disappear."