The Christmas Gift of a Lifetime: Soldiers Return Home 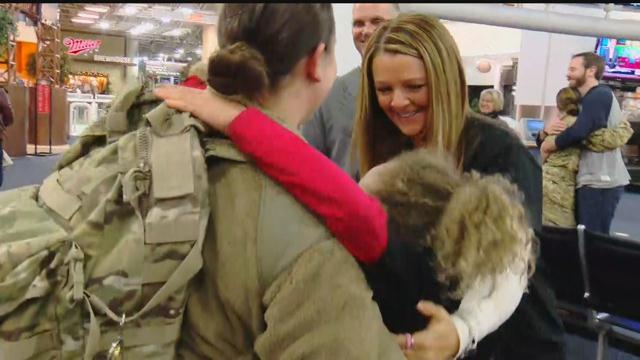 It's Christmastime at the Milwaukee airport and families are lined up to pick up their loved ones. And while Thursday night was no exception, there was a special delivery.

Five soldiers from the Army National Guard came home Thursday night after a seven month deployment in Kuwait. We caught up with the McGee family as they were waiting to pick up solider and daughter Ashley McGee, who is part of the 135th aviation regiment, and coming back from her first ever deployment.

"Scared, very scared and nervous for her but she was very excited. That's why she signed up to do this," said her mother, Lisa McGee.

Waiting, but not quite patiently, especially not for little sister Nini.

And as it turns out, big sis Ashley was missing her just as much.

"I miss my little cuddle bug. It's definitely good to see her. You miss 'em. Little things you miss," said Ashley.

While Ashley was part of a team that flew more than 1200 flight hours and responded to 14 Medieval missions in Kuwait, her family's big plans for her now that she's home is simple.

"Wisconsin has a late deer season and that's all she's been talking about is going hunting, so I'm taking the rest of the time as soon as she gets back after the holidays were going to go and just do normal stuff," said Jeffery McGee, her father.

And while they salute her service, Ashley says, there's no place like home.

"Feel's good. It's cold, but it feels good to see everyone happy!" she said.