The Cavewives bring wit to rock and roll on the CBS 58 News at 4 p.m. 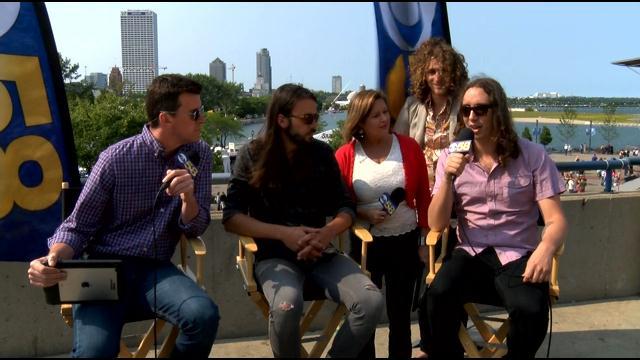 If the name doesn't get you, their witty personalities and dedication to rock and roll will.

The Milwaukee based band \"The Cavewives\" appeared live on the CBS 58 News at 4 p.m.

Their appearance part of a festival long broadcast by CBS 58 to bring attention to local and Wisconsin based bands and those being highlighted on the KNE New Music Stage.

The band was started in 2013 by  Lucas Fitzpatrick  who plays bass and sings and Kevin Topel who plays guitar and also does vocals.

Both had been involved with other groups before and brought in Michael Marten on vocals.

As explained on their website: \"This nucleus of the band quickly reached out to their mutual friend, Erik Darbo (drums), who was a regular in the Milwaukee jazz scene and a full-formed musician in his own right, being a songwriter, guitarist and vocalist as well as a trained drummer.
The Cavewives’ first original tunes were born out of an imagination nourished by a diet of Brian Wilson, Paul McCartney and Todd Rundgren compositions. These songs would culminate in their debut album Be The Dog (2014) the following year -- an album which testifies to both the diversity of influences driving this group as well as the collective aspiration for compositional depth and harmonic richness juxtaposed alongside the seemingly paradoxical desire for emotionally-honest rawness and straightforwardness.\"

For all they've achieved in their short time together, the band still is very down to earth with a sense of fun that made them an enjoyable guest.

We've attached the news segment to this text. Enjoy!