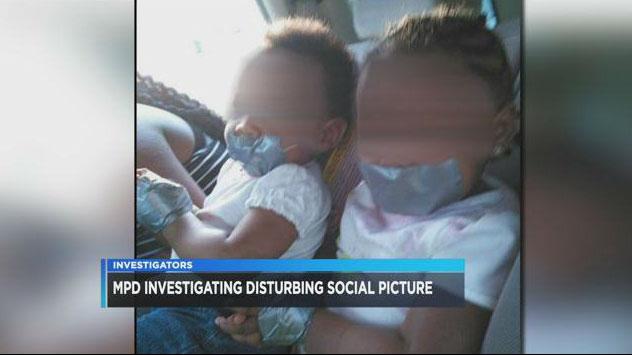 MEMPHIS (WMC ACTION NEWS / CNN) A mother's Facebook photo has gone viral, and has outraged many.

It shows two young children with duct tape over their hands and mouths.

Now authorities are investigating what happened.

WMC blurred the faces of the children seen with their mouths and hands duct-taped.

Tears are in the oldest child's eyes.

A woman with the screen name "Jaton Justsilly Jaibabi" posted this picture of two young children in a vehicle in Memphis, Tennessee.

The caption on the photo reads, "Kids for sale, 45% off because they [are] bad."

Memphis Police say they have opened an investigation after we sent them this picture Thursday night.

The Tennessee Department of Children's services says they have very limited information, but are doing more research before investigating the family.

"I could not breathe, it took my breath away. Caused extreme emotional distress. These are children... these are human beings,” said one parent.

Although many parents are outraged.

The woman's cousin, Derion King says this was just a practical joke.

His message reads in part :

"Basically a joke at the moment that people just went overboard about. People make mistakes and that's what this situation is, a lesson learned. They are safe, unharmed, and loved that's all it is to it."