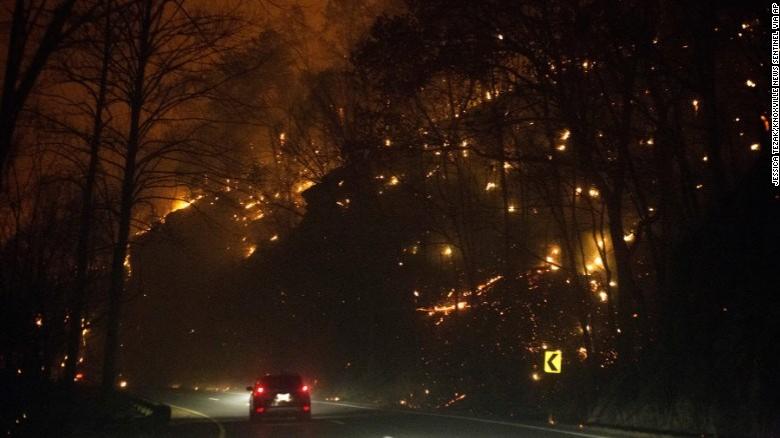 The wildfires, which started Monday, damaged or destroyed more than 250 buildings throughout part of eastern Tennessee that's home to the resort towns of Gatlinburg and Pigeon Forge. In a dizzying 24-hour period, though, officials said Tuesday the disaster spared some major tourist attractions.

Evacuees said the fire that spread without warning from the Great Smoky Mountains, surrounding their homes. They were forced to leave with only the clothes on their backs.

Benzschawel said police banged on his door Monday night to wake him and his partner, Denise Bearden. The couple alerted their neighbor, who managed to escape with her dog.

"We pray we don't experience any more fatalities but there are still areas that we're trying to get to because of down trees and down power lines," Miller said.

The fire that sparked the dozen other blazes was started by a person," National Park Service spokeswoman Dana Soehn said without offering further specifics.

The cause of blaze remains under investigation.During the storm's first 24 hours, strong gusts of up to nearly 90 mph scattered a wildfire's embers across the Great Smoky Mountains National Park into nearby communities. Fires fed off drought-stricken trees. Winds knocked down power lines -- contributing to thousands losing electricity. In turn, that led to new fires.

"Everything was like a perfect storm," Cassius Cash, superintendent of the Great Smoky Mountains National Park, told CNN affiliate WATE.

The fire destroyed a number of structures at Gatlinburg's Westgate Smoky Mountain Resort & Spa. A major attraction, the Ober Gatlinburg ski area and amusement park that overlooks the city, appeared to be spared. But on a road leading to the resort, what used to be homes have been reduced to burned-out husks.

Only the bricks remained intact -- and only in places. The insides have been eaten away by the fire.

Cars parked outside suffered the same fate -- their paint burned to ash, their tires melted away. Uprooted trees leaned on power lines.

Smoke, which turned the sky a bleak gray, continued to drift Tuesday from burned-out vehicles and the charred remains of buildings.

"It is absolutely devastating," said Mark Nagi of the Tennessee Department of Transportation, who posted footage of the destruction on his Twitter feed.On Tuesday, firefighters continued to put out flames and clear fallen trees and telephone poles from roadways, Chief Miller said. But authorities have issued evacuation orders for Gatlinburg and nearby areas including parts of Pigeon Forge.

Pigeon Forge is home to Dollywood, the theme park owned by singer and actress Dolly Parton. At Dollywood, officials with the Great Smoky Mountains National Park evacuated guests from its resort and cabins as flames approached the area. The park was not damaged.

In a statement, Parton said she was heartbroken about the fire damage and had been "praying for all the families affected."

"It is a blessing that my Dollywood theme park, the DreamMore Resort and so many businesses in Pigeon Forge have been spared," she added.Several emergency shelters opened to accommodate evacuees. About 1,300 people stayed overnight at the local community center and park. Nearby the Great Smoky Mountains National Park evacuated employees from the Elkmont and park headquarters housing areas on Monday.Some residents needed oxygen after inhaling smoke, other huddled near the shelters. Officials in Cocke and Sevier counties have canceled classes for Wednesday.

"We watched a building go down in flames," said one tearful evacuee who firefighters rescued.

Officials said they remain uncertain certain when residents would be able to return to evacuated neighborhoods. A curfew remained in effect from 6 p.m. to 6 a.m.Some people -- including guests at one Gatlinburg hotel -- could not safely leave the area as the fire advanced Monday night.Logan Baker, a guest at the Park Vista Hotel, was among dozens of guests unable to leave because falling trees engulfed in flames had blocked the only road out. The fire swept up to the hotel parking lot, he told CNN affiliate WATE.

The fire had not reached the hotel, but smoke had permeated the building, making it hard to breathe, he said. Guests stood in the hotel lobby Monday night with masks over their faces.Tennessee Gov. Bill Haslam, who flew over the scorched forest, said the region's damage was "a little numbing" given how "special" it was for the entire state.

"Millions have families have come here and will continue to come here," Haslam said.Despite some progress battling the Tennessee fire, officials braced for the possibility of spot fires headed into Wednesday.

"The single greatest concern would be the wind," Miller said. "The greater the wind speed is, it just makes our job a little harder. It creates these additional spot fires."

According to CNN meteorologist Michael Guy, the nearby Great Smoky Mountains were under a high wind warning, with possible wind gusts of up to 60 mph.

The area could be helped by up to 2 inches of rainfall expected overnight. The stormy weather's threat could be twofold: Lightning strikes could spark more fires or the downpour could prompt flash flooding.

"It's a devastating time for us, and for Gatlinburg," Gatlinburg Mayor Mike Werner said. "We're strong, we're resilient,...we're going to make it."