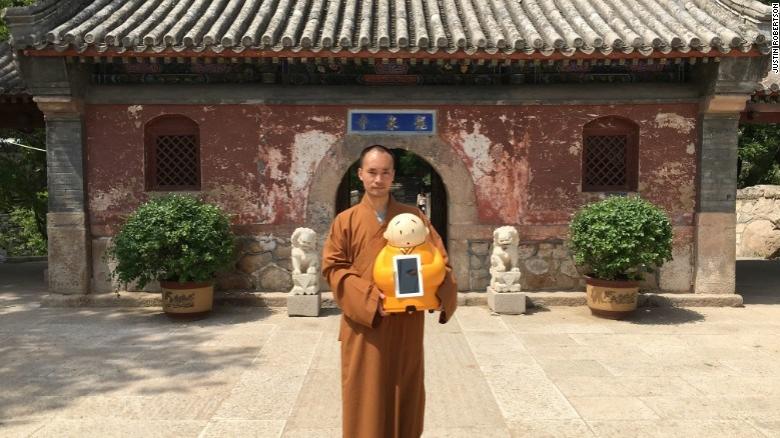 Beijing (CNN) This funny-looking, chubby robot might well be the most popular Buddhist monk in China.

Standing two-feet (60 centimeters) tall, Xian'er is based on a cartoon character created by a Buddhist master at Beijing's Longquan Temple.

He's already attracted a steady stream of admirers to the 1,700-year-old place of worship after first shooting to fame on Chinese social media.

Master Xianfan says the robot is intelligent enough to chant Buddhist mantras and even interact with people.

He can answer up to 100 questions and a CNN team put him through his paces on a recent visit to the temple.

At first, he didn't seem very co-operative. His head kept spinning around and, like a child, he kept saying: "Leave me alone; stop bothering me."

But when he was in the mood, his Buddhist wisdom shined through:

"Where are you from?" we asked.

"How would I answer a question that you human beings have no answer to?" he quipped.

"Xian'er, who are your parents?" we countered.

"Do the designers count?" was his pithy reply.

READ: Why Buddhism is cool in China

Longquan Temple introduced the robot in 2015 in hopes of using cutting edge technology to spread Buddhism. Companies volunteered their expertise for the unusual project.

"We only wanted to explore how to better fuse Buddhism with science, to convey the message that Buddhism and science aren't contradictory."

"It's super cute...I feel it is like a temple mascot, making Buddhism much more accessible," said Liu Jiyue, a college student who went to the temple to meet the robot.

Liu isn't a Buddhist, but that doesn't stop her from posing gleefully for pictures and cooing over the robot's "cuteness."

Xianxun, another master at the temple, says Xian'er isn't a mascot but it's natural that people are attracted to novelty.

"It takes time for people to get connected to Buddhism from a white sheet of paper," he said.

"They need to get interested in the first place."

Some have come from as far away as Shanghai to catch a glimpse of the robot.

Xianfan, a graduate of the Chinese Central Art Academy, first conceived Xian'er (Xian stands for virtuous. Er means dumb in Beijing dialect but is a term of endearment) in 2013 as a cartoon character.

The temple set up an animation studio the same year, staffed and managed by monks and volunteers with backgrounds in animation.

The temple's cartoons have attracted hundreds of millions of viewers on Chinese social media platform Weibo and the monks have produced comic books that dispense Xian'er's brand of Buddhist wisdom.

Xianxun said Longquan didn't set out to be a high-tech temple but many of the monks are highly educated with backgrounds in technology, aerospace, engineering, mathematics, medical science and finance.

Himself a graduate of the prestigious Peking University, Xianxun said the main reason is that the temple is in an area close to Beijing's -- and arguably China's -- top universities.

In the temple's library, which houses tens of thousands of Buddhist books, a full array of ideological works by and about Chinese President Xi Jinping can hardly be missed.

Yet Xian'er doesn't seem care too much about Communist ideology.

When asked about his Chinese dream -- a term President Xi Jinping promotes -- he says he wants to open an ice cream stand.