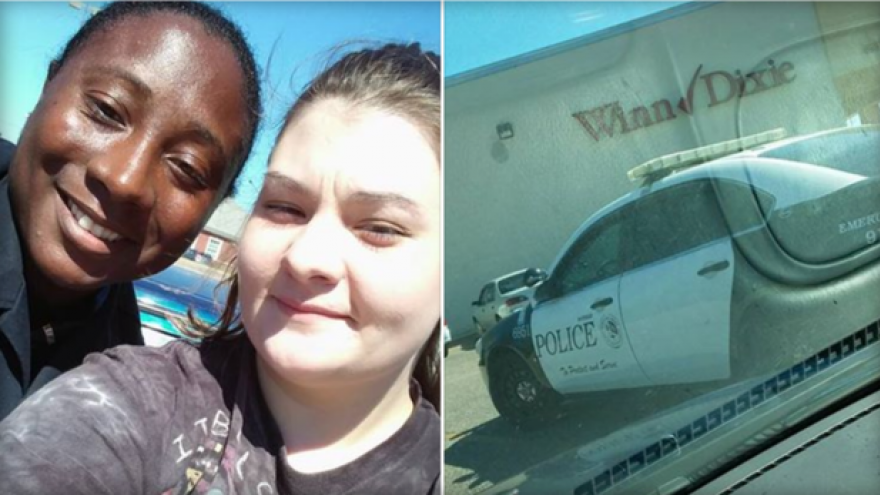 Sheena Davenport walked out of an Alabama courtroom last week with her head down. The 19-year-old mother pleaded guilty to shoplifting and had to pay $700 in fines and restitution.

She stole food from a Walmart nearly a year ago, when she and her boyfriend, 20-year-old Logan McPherson, had fallen on tough times.

"I only had $5 to last until who knows when," Davenport, the mother of an 18-month-old named Skylar, told CBS News. "I had been looking for jobs. We applied for food stamps."

A year later, the family is in a better place, but Davenport said she will forever feel the shame of her actions that day.

As the teen mom left court last Monday, a police officer tapped her on the shoulder and told her to wait outside.

Confused, Davenport did as the officer asked.

After a short drive, the pair pulled into a Winn-Dixie grocery store parking lot in Dothan, Alabama.

"Grab a buggy — let's go shopping," Culbreath said with a grin after they exited their vehicles.

Davenport said she couldn't accept the officer's generous offer, but Culbreath insisted, and they headed into the store.

"We talked about her past struggles and how to make it through them," Davenport said.

Davenport recalls spotting Culbreath in court before, but the pair had never actually met until that day.

"As we were walking through the store I wanted to cry the whole time that someone would actually do something like this for me in my struggling times," Davenport said.

When Davenport was finished picking out her groceries for the week, Culbreath took the cart and footed the $139 bill.

Davenport was so overwhelmed and grateful she asked the officer to snap a quick picture, which she shared on Facebook to show her friends "there are still people out there to make a difference."

The post went viral with more than 10,000 likes and thousands of shares.

The Dothan Police Department saw the post and praised Culbreath for her act of kindness.

"Wow! Way to go Katrina! You're the best!" the department posted the next day.

Davenport hopes one day to pay Culbreath back, and said the officer taught her a valuable lesson: "Don't be afraid to ask."

"When my time comes I will pay it forward," she said.