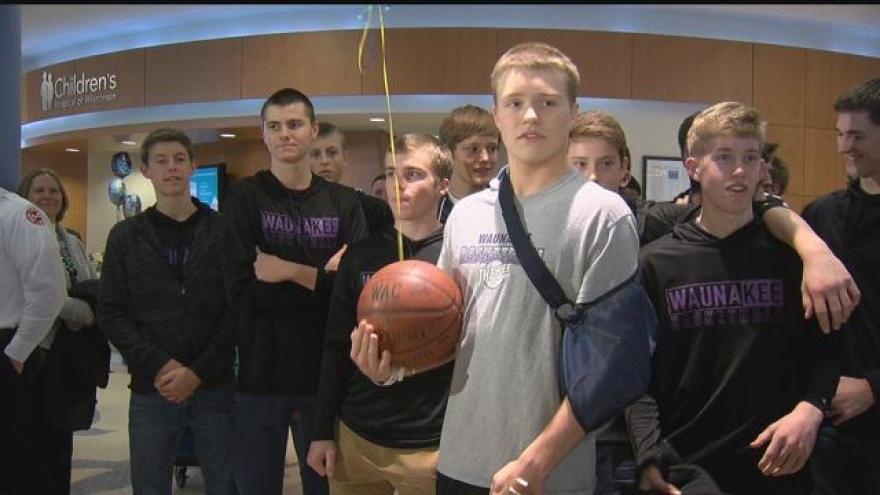 A Dane County student whose heart suddenly stopped during a basketball game at West Allis Central High School was given a special send off at Children’s Hospital.

Michael Saxby, 16, had an undiagnosed heart condition and it was the speedy response of others that saved his life.

"I’m just thankful for everything that happened and the way it happened,” Michael Saxby said. “It just feels good to be out."

His parents are grateful. His mother Molly Saxby is surprised at the outpour of support.

Michael, who was a visiting player from Waunakee High school collapsed on the court during the game on December 27th.

Scott Barthlama was the athletic trainer that day and he said he analyzed the situation and took a plan of action. He performed CPR and grabbed a defibrillator the school has in case of an emergency.

However, he didn’t have to use the school’s defibrillator because the paramedics arrived in time to use their own equipment.

Michael was diagnosed hypertrophic cardiomyopathy (HCM).  It is a common cause of sudden cardiac arrest in young people, including young athletes, according to the American Heart Association.

Michael won’t be able to play sports anymore. However, he said he’ll still be part of the team.

"I’m just going to look at it differently and be thankful for what I have, just be happy I’m alive," Michael said.

West Allis Central High School has defibrillators thanks to a Children's Hospital program in case of an emergency. The hospital has partnered with the school district since 1999.