Tee it up to help National Fallen Firefighters Foundation 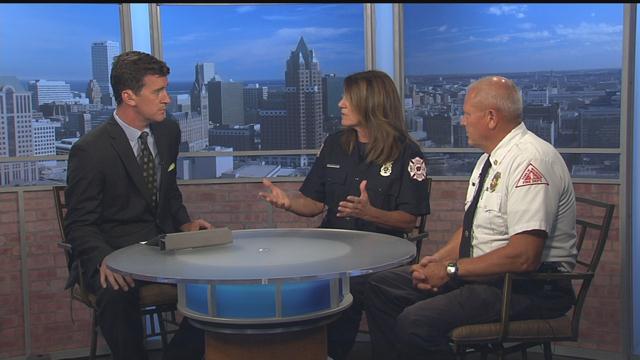 Golf for a great cause.  Members of the National Fallen Firefighters Foundation joined us live on the CBS 58 News at 4 to invite the public to the third annual NFFF golf tournament happening on Friday, August 21 at Silver Spring Golf Club in Menomonee Falls.

Carrie Rydzik, local chapter president of the NFFF, says the goal of the organization is to help families of firefighters rebuild their lives after a line of duty death. \"As soon as they are notified of a line of duty death, it's eight hours. They (the NFFF) will be at that community and helping the family,\" Rydzik said.

Chief Dan Buchholtz from the Town of Waukesha Fire Department says that families who suffer this tragedy are often losing the main breadwinner, which can impact a family financially for years.  \"Most of the fire departments in the country, there's over 80-percent of them that are volunteer departments, unpaid people. There's lots of financial support to kids that have lost mom or dad,\" Buchholtz said.

The golf tournament is in a best-ball or \"scramble\" format. Registration at 10am, shotgun start at 11:30am. Lunch and dinner banquet are included, as well as hole contests, prizes, and raffles.

For more information on the tournament, or to sign up, go here.

Congress created the National Fallen Firefighters Foundation to lead a nationwide effort to honor America’s fallen firefighters. Since 1992, the non-profit Foundation has developed and expanded programs that fulfill that mandate. Our mission is to honor and remember America’s fallen fire heroes and to provide resources to assist their survivors in rebuilding their lives and work within the fire service community to reduce firefighter deaths and injuries.

Each October, the Foundation sponsors the official national tribute to all firefighters who died in the line of duty during the previous year. Thousands attend the weekend activities held at the National Fire Academy in Emmitsburg, Maryland. The Weekend features special programs for survivors and coworkers along with moving public ceremonies.