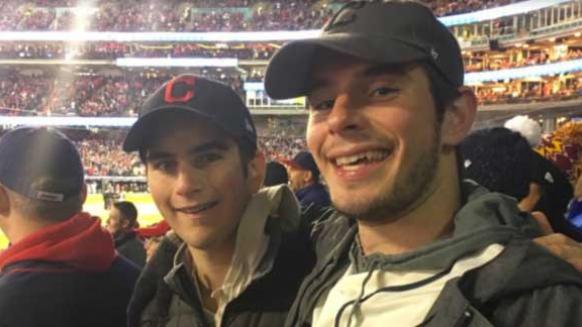 Instead, he told his teacher the truth.

“I’ll be completely honest. I came and swiped and gave a kid next to me my homework because my dad got us tickets for the World Series in Cleveland,” the Ohio University student replied to the professor in an email. “I’m sorry, I didn’t want to miss the attendance and I did the homework. I understand if you have repercussions. Attached is the picture below of my brother and I at the game last night.”

In his initial email, Damian Nance, a professor of Geological Sciences at the school, scolded Winovich for “deceit,” for which he has “zero tolerance.”

But after hearing Winovich’s reasoning, his tone quickly changed.

“Charlie. That looks like an impeccable excuse. No repercussions. Go Tribe!” the teacher replied.

Winovich was so tickled by the teacher’s unexpected response that he posted screenshots of their conversation on Twitter — and the internet got a good laugh. More than 2,500 people retweeted Winovich’s post, praising the teacher for being “cool.”

Describing himself as “the most die-hard Cleveland sports fan ever,” attending Wednesday night’s game was a dream come true for Winovich, despite the disappointing outcome (the Chicago Cubs won, 5-1).

It was even more special to get the tickets as a present from his dad, a quadriplegic who has been living with Lou Gehrig’s disease for the past 12 years.

Winovich’s grandfather had season tickets that he planned on selling so Winovich’s dad could get a better wheelchair. But his dad refused, and instead, insisted that Winovich and his younger brother, Will, go to the game.

“It was me and my little brother and probably the closest time we’ll ever share together,” Winovich told CBS News. “I can’t even explain to you what this past year has been like for your everyday Cleveland fan. It’s surreal.”

He said he decided to be honest with his professor because he didn’t care if his absence had repercussions.

“No matter what the case, if you are a Clevelander and something big is going to happen, we will be there to support our own,” the Indians fan said.