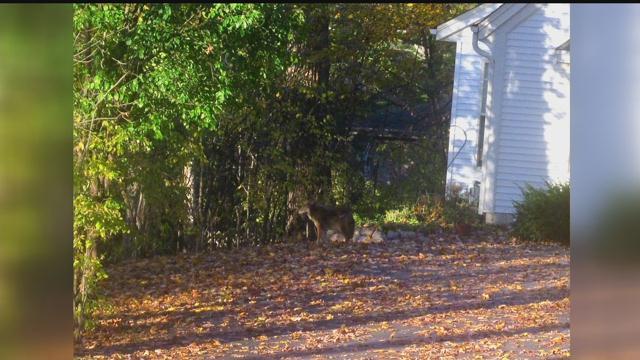 Jennifer Arneson has lived in her Wauwatosa home for seven years. Located near a wooded area, it's not uncommon to see coyotes roaming in her neighborhood.

But this year, she said they're becoming a nuisance.

"They're getting braver," she said.

"He was just a little smaller than a wolf," she said. "That might seem like an exaggeration, but it was larger than a normal dog."

It's possible Arneson saw this. Her neighbor snapped a picture of a wild animal in their neighborhood Monday morning.

We showed it to Dianne Robinson with the DNR who said, "the length of the legs and length of the snout, as well as the downward drop of the tail, suggest it's likely a coyote."

"Coyotes are a vital part of our natural Eco-system," said Milwaukee County Supervisor John Weishan. "We're not out to shoot every coyote in Milwaukee County, but we do have to manage those that become a problem."

Weishan, who represents the 16th District, is sponsoring a resolution that would provide up to $25,000 to find a solution. The DNR and Milwaukee County Parks Department will develop a county-wide plan to combat nuisance coyotes.

But there is one way to minimize the risk right now.

Smith said residents should not leave out food and water to feed any animals. Doing so is breaking county law.

"Maybe it's not even meant for the coyotes, but they can be habituated, they can become used to humans," he said.

With kids and three cats, that is Arneson's biggest fear, but she's hopeful for a balanced environment soon.

"I don't believe we need to get rid of them to make our lives habitable, but we need to do it in a way that keeps our families safe," said Arneson.

Money for the nuisance coyote management plan is coming from a county fund set aside for emergencies.

The Milwaukee County Board of Supervisors is expected to take a vote on it Thursday. If approved, it's unclear how soon it would be implemented.