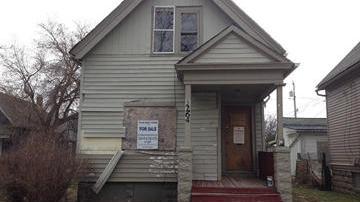 MILWAUKEE -- It's not going away any time soon.  Abandoned, foreclosed homes have taken over some Milwaukee neighborhoods.  The city owns more than 1,200 - that number will increase over the next few years.  The mayor has thrown money and resources at the problem, hoping to save many of the homes and ultimately get families into them.

\"This is my first home,\" Guadalupe Zendejas said.

It's a little more than a fix up.

Trash all over.  Deteriorating fixtures. Holes in walls.

That's exactly what it will take - work -lots of it.

\"I don't want to own a thousand homes,\" Mayor Tom Barrett said when asked about the foreclosures.

With this transaction, the city sheds one of the 1,200-plus foreclosed homes it owns -- while a family moves in with a long road ahead.

CBS 58 asked Mayor Barrett if his plan to get rid of these homes is working.

\"Yes, we think it is working,\" Barrett said.  \"We've sold a lot more homes at this point this year than we did last year. We're on track to sell maybe 300 homes this year but we have to sell more.\"

\"A lot of these families have the difficulty to prove that they can rehab the property if there's 30, 40, 50, or 60,000 in rehabilitation costs,\" Ricardo Castillo, a real estate consultant with Finka Realty, said.

Zendejas paid $15,000 for this home on North 37th street.  But there's tens of thousands of dollars in work ahead her and her family.

\"Just getting it fixed. So we can come live here as soon as possible,\" Zendejas said when asked about her priority.

Real estate experts understand what the city is trying to do, but there are  challenges when you see the housing inventory.

These are just a few of the foreclosed homes across the city.  Signs indicating ownership, but little life left.  Many have trash strewn across the yards, busted windows, broken doors, and other problems.

The city hopes low prices and local groups help draw people to some homes - no matter where its located.

\"Unfortunately when you have a foreclosure you have a lot of deterioration,\" Barrett acknowledged.

The bottom line is these homes are a drain on taxpayer money.

\"When the city owns them, they're not paying taxes which means the tax burden is spread over a small pool,\" Barrett said.  \"We want that tax burden spread over a much larger pool because then everybody can pay less.\"

The city is investing in this right now -  to the tune of $12 million in the 2014 budget.  Some includes $2.2 million for blight elimination or demolition.  $2.2 million more to help repair many of the rundown properties. Mayor Barrett needs people like Zendejas to step up and buy.

\"This is way bigger than what we have,\" Zendejas said, looking past all the work to be done.  \"Our previous home looks so big on the outside but only has three rooms on the inside. We had to make a living in the basement for my parents because we're five children in total.\"

\"I would be the happiest mayor in America if that's what we had.\"