Taliban attack Afghan base; More than 100 dead or wounded 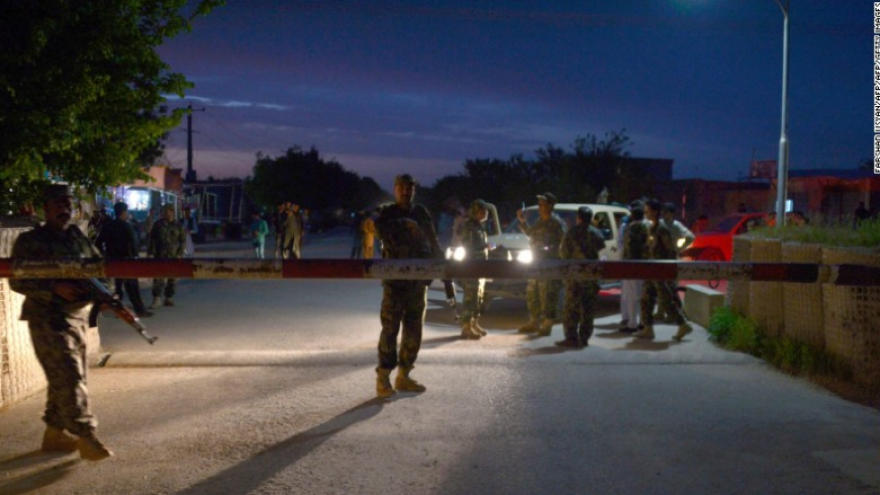 (CNN)- The Taliban's deadly raid Friday on a northern army base that killed or wounded more than 100 people was revenge for the deaths of two of its officials in the region, a spokesman for the group told CNN.

Zabiullah Mujahid told CNN in an email Saturday that the attack was undertaken because pro-Afghan government forces killed two Taliban shadow governors in the northern provinces of Kunduz and Baghlan.
The assault began as soldiers were observing Friday prayers at Camp Shaheen near Mazar-e Sharif, one of the nation's most populated and developed cities, the Afghan military said. The city is in Balkh province and the base is the headquarters of the 209th Shaheen Corps.
Dawlat Waziri, an Afghan Ministry of Defense spokesman, declined to give a more precise accounting of dead and wounded but said one would be released later.
Taliban fighters dressed in military uniforms raided the army base in northern Afghanistan, raking it with gunfire in an hours-long attack that left more than 100 soldiers dead or wounded, officials said.
As many as 140 people may have been killed in the attack, sources close to the situation told CNN. The sources are officials who requested anonymity so as not to interfere with the Ministry of Defense or Ministry of Interior, which are responsible for reporting official tolls.
The uniformed attackers entered the base in vehicles and opened fire, Afghan army spokesman Abdul Qahar Araam said. The gunfire was followed by an explosion at one of the base's gates.
Afghan President Ashraf Ghani has declared Sunday to be a national day of mourning in remembrance of the Afghan forces killed on the base. The Afghan national flag will be flown at half-staff in Afghanistan and its missions.

The massive attack is a setback for the Afghan government and its coalition allies faced with a persistent Taliban insurgency and the presence of ISIS and other terrorist groups.
US troops have been fighting there for nearly 16 years against a resilient Taliban.
In February, Gen. John Nicholson, commander of US forces in Afghanistan, told the Senate Armed Services Committee that leadership assesses \"the current security situation in Afghanistan as a stalemate.\"
\"We remain concerned about multiple critical factors,\" he said.
He cited the government's stability; Afghan military casualties; the influence of Pakistan, Russia and Iran; \"the convergence\" of various terror groups; the narcotics trade and corruption.
There are 8,400 US troops in Afghanistan and 6,000 troops from NATO and allied counties. Nicholson said the coalition faces \"a shortfall of a few thousand troops\" to break the \"stalemate.\"
The Taliban action comes more than a week after the US military dropped America's most powerful non-nuclear bomb on ISIS targets in Afghanistan, killing 94 ISIS fighters.
ISIS claimed responsibility for an attack last month on Kabul's heavily fortified diplomatic quarter.
National security adviser Lt. Gen. H.R. McMaster recently visited Afghanistan as Washington considers a full \"strategy review.\" of policy toward that country.
\"In recent years, at a period of our maximum effort, we didn't have as reliable a partner in the Afghan government as we would've liked,\" McMaster said. \"Now we have a much more reliable Afghan partner and we have reduced considerably the degree and scope of our effort.\"