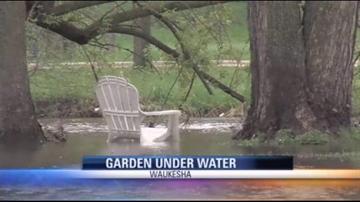 WAUKESHA -- With all the rain we've seen in the last 24 hours, CBS 58 is checking on local river levels.

One area of concern is the Fox River in Waukesha.

As of noon on Tuesday, the National Weather Service reported the water level was just below flood stage of six feet, which puts the water high enough to take over a good section of green space at Bethesda Park and nearby backyards.

Rick Kokan's backyard garden is full of vegetables like spinach, potatoes and beets, but you can't see the plants because they're under water. The same thing happened in June of last year.

He said he's keeping a close eye the situation, as he waits for the water to recede.

The longer it takes, the likely his garden is ruined and Rick will have to start all over.

Floodwaters are also close to taking over his lawn chairs and a neighbors swing set, but Rick said it could be worse.

\"2009 was when we had the flood in the backyard and it went all the way up to the wall here and it got in our basement,\" he said. \"Other than that it wasn't so bad. It was just river water. It wasn't sewage.\"

The city of Waukesha has put up barricades on sidewalks at Bethesda Park in hopes of keeping people out of the swollen Fox River.

All of this water is flowing downstream toward Wheatland in Kenosha county.

There, the Fox River is expected to exceed flood stage of 10 feet on Thursday.
Share this article: